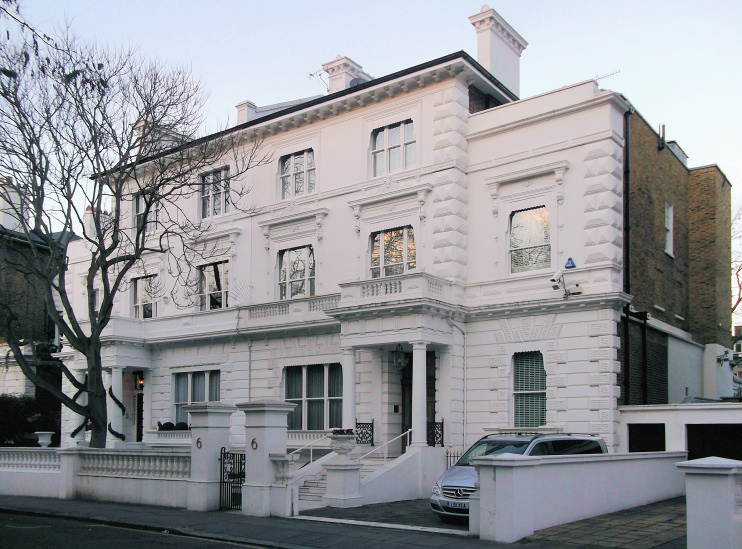 Although someone called William Bolton lived here­abouts in the 16th century, it seems likely that the locality’s name derives from another William Bolton (or Boulton) who bought land in the area in 1795. Twelve years later Bolton sold the land between the Old Brompton Road and the Fulham Road to the confec­tioner James Gunter, who as a result of this and other acqui­si­tions became the dominant landowner in this part of Kens­ington, which then consisted mostly of market gardens and nurseries.

James Gunter died in 1819 and his son Robert inherited the estate. He later expanded it still further and began to lease parcels of land for house­building. After Robert Gunter’s death in 1852 his sons Robert and James continued the process.

By the end of the 1840s several minor mansions stood along the local section of the Old Brompton Road (but set so far back from that road that sizeable houses could later be built in their front gardens), including the extant Osborn House, and to its east Bladen (or Bladon) Lodge and the neo-Greek Sidmouth Lodge – which was named, it is thought, after its first occupant’s home town.

South of those lodges George Godwin junior, architect and editor of The Builder magazine, laid out the vesica piscis (pointed oval) of the Boltons in 1849 and soon after­wards built the central church of St Mary, West Brompton (now St Mary, The Boltons) and then the houses on the east side.

The unusually aisleless, cruciform St Mary’s was conse­crated on 22 October 1850 and its spire was added in 1854. The interior was rearranged in 1872 and again in 1952. A two-storey church hall was attached in 1965–6. The gardens north and south of the church are only acces­sible to residents of the Boltons. However, the Boltons Gardens Enclosure, which imme­di­ately surrounds the church, is open to everyone.

Godwin built the houses on the west side in 1857–60, after which devel­op­ment rapidly spread westward, beginning with the Little Boltons and ulti­mately extending to the edge of Brompton cemetery.

The Boltons’ stuccoed Ital­ianate mansions verge on the palatial, are rich in orna­mental detail and are all now grade II listed. It has been suggested that the difficult economic circum­stances of the time prompted the decision to build such luxurious resi­dences, because the very wealthy were less likely to have been adversely affected by the downturn.

St Mary’s school opened on Gilston Road in 1878. The Gothic-influ­enced building is now home to the Budokwai, an upmarket martial arts club.

Sidmouth Lodge was demol­ished in 1937 to make way for the Frobisher (later Earls Court) telephone exchange. This has since been replaced by three 21st-century houses on Boltons Place (which was orig­i­nally the northern section of Gilston Road). These were designed in a style that harmonises impres­sively with the neigh­bouring prop­er­ties and one has since been sold for over £50m.

The highly regarded Bousfield primary school opened in 1956. It was built mainly on the site of Bladen Lodge, which had been bombed in the war. The school’s grade II listed buildings were designed by Cham­berlin, Powell and Bon – the part­ner­ship best known for its work on the Barbican.

Some of the local­i­ty’s houses were converted to flats while others were adapted for commer­cial or insti­tu­tional use. For much of the 20th century, numbers 20 and 21 The Boltons served as Our Lady’s convent, which was run by the Fran­ciscan mission­aries of Mary, together with a girls’ hostel next door. However, many prop­er­ties have retained, or been returned to, their original purpose – that of single family houses – more than have buildings of similar size in most other parts of London.

According to the 2011 census, the local­i­ty’s most numerous ethnic group is ‘other white’, followed by ‘white British’. Most residents were born in England, France, Italy or the United States. Accord­ingly, English, French and Italian are the most widely spoken main languages, followed by the Scan­di­na­vian tongues. Working residents tend to be managers, directors and senior officials, often employed in financial and insurance activ­i­ties. Standards of education and health (and of course wealth) are very high.

Past residents of the Boltons include the lyricist WS Gilbert, the ‘Swedish Nightingale’ Jenny Lind and the film star Douglas Fairbanks Jr, who once had Queen Elizabeth II and Prince Philip over for dinner.

The children’s writer Beatrix Potter lived with her parents at 2 Bolton Gardens from her birth until her marriage in 1913, when she moved to the Lake District. The house stood on what is now part of the site of Bousfield school (close to the northern edge of the main complex of school buildings).

* The picture of Nos 5 and 6 The Boltons at the top of this page is adapted from an original photograph copyright David Anstiss, and the picture of Old Brompton Road is adapted from an original photograph copyright Peter Trimming, both at Geograph Britain and Ireland, made available under the Attribution-ShareAlike 2.0 Generic Licence. Any subsequent reuse of either image is freely permitted under the terms of that licence.