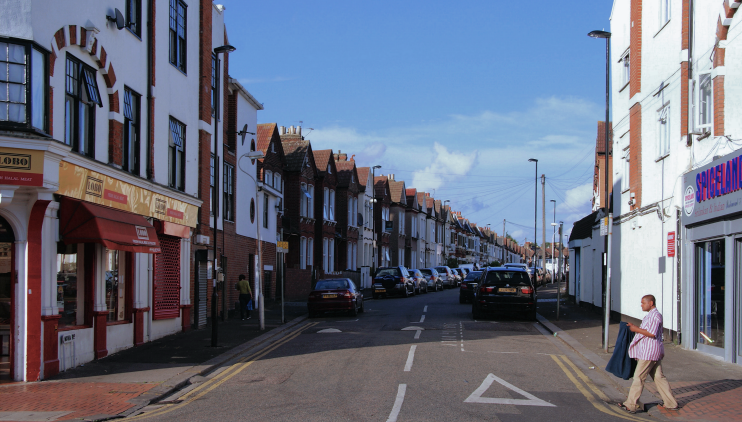 Broad Green’s name, which is self-explana­tory, dates back to at least the 16th century. Croydon Lodge appears to have been one of the earliest grand houses here. It was described as having “conve­nient offices, coach house, stabling, gardens and pleasure grounds,” when it was sold in 1802 with a further 25 acres of land.

Broad Green remained a small settle­ment on the edge of Croydon Common until it began to attract some other impres­sive homes early in the 19th century. Broad Green House was built in 1807 and was later joined by several other prop­er­ties named after the locality. In the early 1850s the Arch­bishop of Canter­bury, John Sumner, paid for the construc­tion of Christ Church on the road that now bears his name.

Towards the end of the 19th century spec­u­la­tive devel­opers began to buy up the mansions and replace them with streets of terraced houses for the lower middle classes. Various amenities were provided and an old beer shop was rebuilt as the Star Hotel.

Nova Road (shown in the photo­graph above*) and Kidder­min­ster Road were laid out on the site of Broad Green Place, with the (orig­i­nally) imposing shops of Royal Parade fronting London Road.

Chatfield Road and Montague Road filled the grounds of Broad Green House, although the house survived as a school. Croydon Lodge lasted until the 1920s, when it was replaced by Elmwood Road.

Over the course of the 20th century Broad Green declined and parts of the area were rebuilt by the council, including the Kingsley Road estate to the west of Mitcham Road. London Merchant Secu­ri­ties built City House on London Road in the late 1960s and leased it to the Philips elec­tronics company as its UK headquarters.

Broad Green has been the recipient of signif­i­cant regen­er­a­tion funding in the past two decades and a smart new library was built on Canter­bury Road in 1998. Fairview New Homes acquired the freehold of City House in 2006 for conver­sion to resi­den­tial apart­ments. Other devel­opers have since added new apart­ments blocks in the part of Broad Green nearest central Croydon.

This locality was seriously affected by the riots of August 2011 and Royal Mansions were burned down. Croydon council has since been investing in improve­ments along London Road – between West Croydon and Croydon Univer­sity Hospital – with the aid of funds from the Mayor of London and national government.

According to a 2013 Croydon Adver­tiser report, “a group of campaigners … believe renaming the area ‘Broad Green Village’ will act as a fresh start for a street scarred by the riots of 2011 and attract the sort of busi­nesses which will help West Croydon be known for its coffee shops and restau­rants, rather than fast food and payday loans.” However, the proposal attracted more derision than support.

The popu­la­tion of the Broad Green ward is 31 per cent white, 7 per cent mixed race, 34 per cent Asian or Asian British and 25 per cent black or black British, according to the 2011 census. A high propor­tion of the working popu­la­tion are in semi-skilled and unskilled manual jobs. Broad Green is rated the third most deprived ward in the borough, after New Addington and Fieldway.

* The picture of Nova Road, Broad Green, at the top of this page is adapted from an original photograph, copyright Bill Boaden, and the picture of the demolition of Royal Mansions is adapted from an original photograph, copyright Peter Trimming, both at Geograph Britain and Ireland, made available under the Attribution-ShareAlike 2.0 Generic Licence. Any subsequent reuse of either image is freely permitted under the terms of that licence.