A former farm and now an electoral ward taking in central, north-west and south-east Beckenham 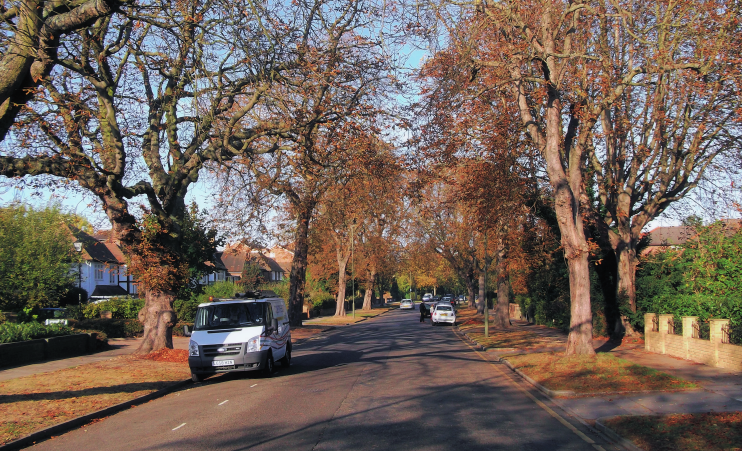 Copers Cope’s name may be a corrup­tion of ‘Cooper’s Copse’. Copers Cope House began life as a farmhouse, probably in the late 17th or early 18th century. The house still stands at the corner of Southend Road and Copers Cope Road, hidden behind trees and fencing. It is the most signif­i­cant building of its age in Beckenham but its appear­ance was altered when it was enlarged in the 19th century.

Copers Cope Farm covered 250 acres and was acquired by Beckenham’s leading landowners, the Cator family, in 1783. The Cators first sought to build houses on the farm in 1813 but it was not until the 1860s that New Beckenham truly began to evolve here. As so often in what is now outer London, the coming of the railways was the stimulus to subur­ban­i­sa­tion: Beckenham Junction station opened in 1857, followed by New Beckenham in 1864.

Most of the area was built up between the mid-1870s and mid-1890s. Lawn Road, Park Road (shown in the photo­graph above*) and Brackley Road were all named after former fields on Copers Cope Farm.

The presence of a cluster of sports grounds protected (and continues to protect) the north-western part from the density of house­building that occurred elsewe­here. (The surviving grounds of Beckenham Place provided even better protec­tion in the north-east, but this parkland lies outside the Copers Cope ward. See Beckenham Hill for more.)

In 2005 Beckenham MP Jacqui Lait raised the issue of local overde­vel­op­ment in a parlia­men­tary debate, “with regard to more and more single family homes being torn down and replaced with apartment buildings,” and specif­i­cally mentioned the Copers Cope area.

As a result of the contin­uing conver­sions and replace­ments, the Copers Cope ward has a high propor­tion of one-person house­holds and rela­tively few homes with dependent children. According to the 2011 census, 83 per cent of Copers Cope’s residents are white; down from 90 per cent in 2001.

* The picture of Park Road at the top of this page is adapted from an original photograph, copyright David Anstiss, at Geograph Britain and Ireland, made available under the Attribution-ShareAlike 2.0 Generic Licence. Any subsequent reuse is hereby freely permitted under the terms of that licence.