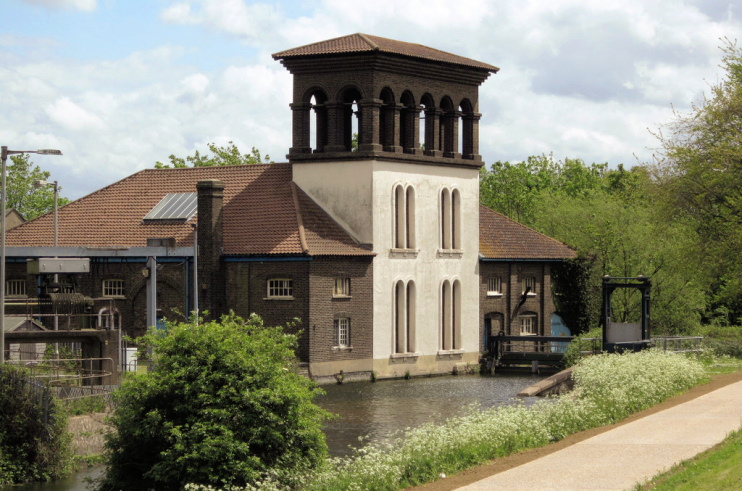 A watermill was in existence here by the 14th century, when it ground corn. Gunpowder was made during the 17th century and the vicinity was at the time known as Powder­mill Marsh. There­after, the mill succes­sively produced paper, leather (presum­ably grinding bark here to yield tannin) and linseed oil.

The mill was rebuilt c.1806 in London stock brick with Portland stone dressings. As is obvious from the photo­graph above,* the original roof has since been replaced. New owners the British Copper Company smelted ore at its works near Swansea and brought copper ingots here in barges – by sea, and then via the Thames and the Lee Navi­ga­tion. The ingots were rolled into sheets that were used for various purposes, including stamping halfpenny and penny Conder tokens. Copper rolling and stamping continued here until 1857.

The mill was acquired by the East London Water­works Company in 1859 and the Ital­ianate tower was added in 1864 to accom­mo­date a Cornish Bull engine. This and the mill’s water­wheels helped drain the surrounding marshes during the construc­tion of the Waltham­stow reser­voirs.

The first reservoir opened to the north of the mill in 1863. There are now a dozen, covering 300 acres and serving 1.5 million customers – as well as forming one of London’s biggest fisheries. The Copper­mill Stream runs through the middle of the reservoirs.

Nowadays, the Copper­mills building is used as stores and most of the vicinity is occupied by Thames Water’s filter beds and pumping stations, which replaced the Lea Bridge water­works in 1972. Water from the New River arrives here after its journey south through Hert­ford­shire and the Copper­mills water treatment works is a major supplier to the London ring water main. The regularly-tested Copper­mills chlorine siren will warn locals if there is ever a leak of toxic gas (see the comments beneath this image on Flickr).

The neigh­bouring resi­den­tial area lies on the western edge of Waltham­stow. This is a socially and cultur­ally mixed locality and the four largest ethnic groups here are of white British, Pakistani, Polish and Caribbean heritage.

The Copper­mill public house is located at the corner of Copper­mill Lane. The estab­lish­ment took its present name c.1986, before which it was called the Lord Kitchener.

Copper­mill Fields is a nature reserve wedged between the railway line and the western edge of the water­works. Copper­mill Park is a small recre­ation area situated at the south-west corner of Copper­mill primary school. 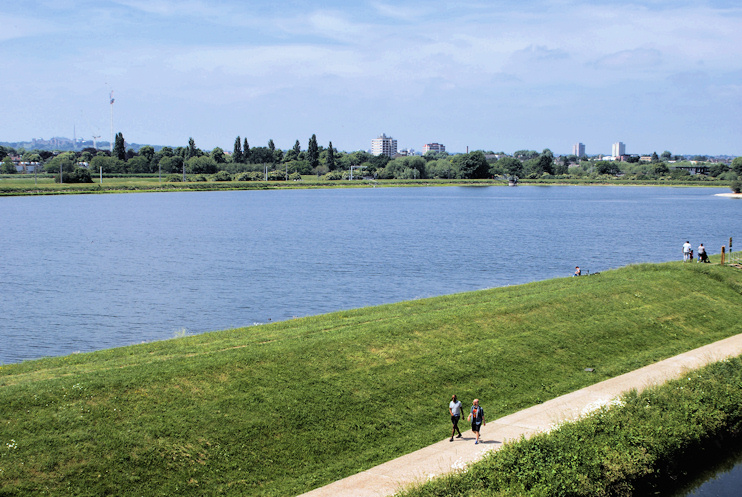 In December 2017 the Copper­mills building’s Ital­ianate tower was opened to the public as part of the Waltham­stow Wetlands project. There are infor­ma­tion boards in the entrance and panoramic vistas in all direc­tions, like the view over the Warwick Reservoir East, shown above.

* The picture of the Coppermill on Coppermill stream at the top of this page is adapted from an original photograph, copyright Colin D Brooking, and the view over the Warwick Reservoir East from the Coppermill Tower is modified from an original photograph, copyright Robert Lamb, both at Geograph Britain and Ireland, made available under the Attribution-ShareAlike 2.0 Generic Licence. Any subsequent reuse is freely permitted under the terms of that licence.