An undulating and upmarket locality situated between Eastcote Village and Pinner 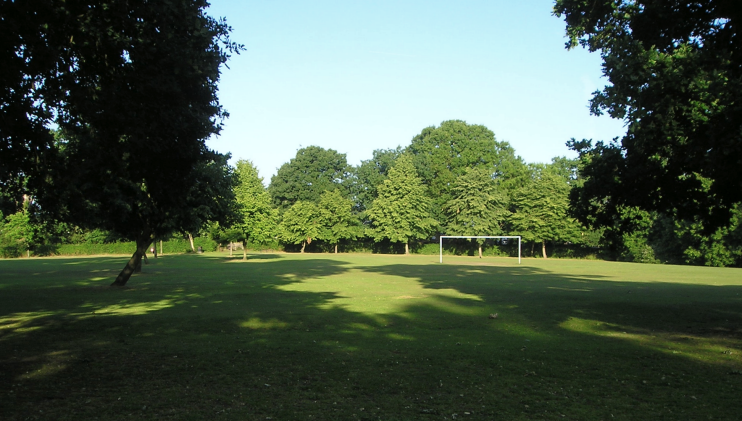 Cuckoo Hill rises gently from Pinner Green in the north to just over 200 feet above sea level in the vicinity of the recre­ation ground (shown in the photo­graph above*) and the western end of the road called High View. From this elongated brow it then slopes down to the River Pinn in the south.

Archae­ol­o­gists have detected traces of the south-western end of Grim’s Dyke at Cuckoo Hill, beyond which the medieval earthwork seemed to split into several branches before petering out in Ruislip and Eastcote.

Until the Ruislip Enclosure Act of 1804, Cuckoo Hill marked the eastern edge of Ruislip Common, which was then an unin­hab­ited wilder­ness. Cuckoo Hill Farm was at that time the property of the Eastcote heiress Elizabeth Rogers, who also owned several other farms in the parish. The farmhouse is still standing, although in altered form and hemmed in by even more spacious prop­er­ties. Its location is marked by a big pink pin on the map below.

The Metro­pol­itan Railway curved around the northern slope of the hill in 1887, when the line was extended to Rick­mansworth from its earlier terminus at Pinner. However, it was not until the late 1920s that most of Cuckoo Hill was consumed by suburban devel­op­ment, some of it distinctly grand, with detached houses built along roads planted with flowering trees. The adver­tising for the Cuckoo Hill estate, built by W Telling of Eastcote, described the prop­er­ties as “the City Man’s Dream.”

David Chambers founded the Cuckoo Hill Press in 1959 at his home in Cuckoo Hill Road. He made his first press himself and has printed numerous illus­trated books of the highest quality.

On the south-eastern slope of the hill, West Lodge primary school opened on 1st January 2009 following the amal­ga­ma­tion of West Lodge first and middle schools.

Until recently the UK branch of the Sathya Sai Education in Human Values Trust was based at The Glen in Cuckoo Hill. This detached house was sold in 2010 for £705,000.

The Victorian/Edwardian writer and critic Barry Pain lived at The Circuits, Cuckoo Hill. The house, which was demolished in 1957, had been drolly named by a previous owner, Judge Alderson. The Circuits is now the name of the residential cul-de-sac that replaced the house and its grounds.

* The picture of Cuckoo Hill open space on this page is adapted from an original photograph, copyright Marion Phillips, at Geograph Britain and Ireland, made available under the Attribution-ShareAlike 2.0 Generic Licence. Any subsequent reuse is hereby freely permitted under the terms of that licence.