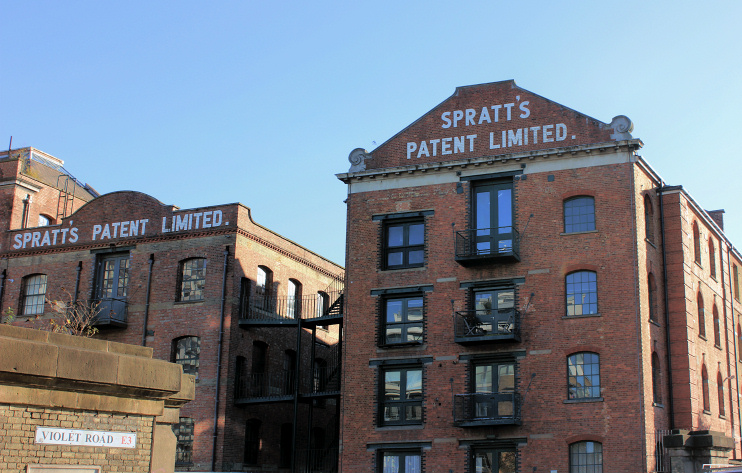 Like most of Bromley-by-Bow, this area began to fill with ware­houses and working-class housing from the 1820s and became progres­sively poorer and more over­crowded as the 19th century wore on.

Using funds generated by the sale of the City church of All Hallows Staining, the Grocers’ Company paid for the construc­tion of All Hallows Bow in 1873–4. The church was wrecked by a bomb during the Blitz and was after­wards rebuilt in a style inspired by Early Christian archi­tec­ture, utilising surviving parts of the original core. The interior has since been subdi­vided to introduce a multi-func­tional hall.

Beside the railway track and the Limehouse Cut on Violet Road, Spratt’s warehouse is regarded as one of Britain’s finest indus­trial buildings. Built in 1899 to make and store pet food and biscuits, it has now been converted into flats and offices and is shown in the photo at the top of this article.

Municipal slum clearance and flat-building trans­formed the vicinity of Devons Road over the course of the 20th century – without signif­i­cantly improving its aesthetics – but a handful of Victorian struc­tures have survived.

Post-war devel­op­ments included the LCC’s Lincoln estate, which was featured in-depth in Dan Cruick­shank’s three-part BBC TV series At Home with the British in 2016.

Two semi-derelict Victorian shops in Devons Road were the first prop­er­ties to be managed by Acme Studios, marking the begin­nings of an organ­i­sa­tion that would become the largest provider of working and living space for artists in London.

Devons Road was one of the original 15 stations on the DLR when it opened in 1991 on a disused section of freight line. It was formerly the site of British Railways’ first all-diesel main­te­nance depot.

South-west of Bromley-by-Bow station, the new flats in and around Hannaford Walk and Oxley Square occupy the site of St Andrew’s Hospital (orig­i­nally the Poplar and Stepney Sick Asylum), which was demol­ished in 2008.

Light industry and ware­housing dominate the quarter south-east of Devons Road station, prin­ci­pally inhab­iting the corru­gated sheds that line St Andrews Way. This commer­cial zone was created in the 1980s and 90s on land formerly filled with railway sidings and engine and carriage sheds.

Across the railway line and east of Violet Road, the housing asso­ci­a­tion Peabody has built 400 new homes in blocks lining Barry Blandford Way, which is named after a community activist and Tower Hamlets coun­cillor who died in 2011. To the north of the Peabody project, almost engulfing the Widow’s Son public house, Linden Homes have built the Lime Quarter, which is shown in the CGI below. 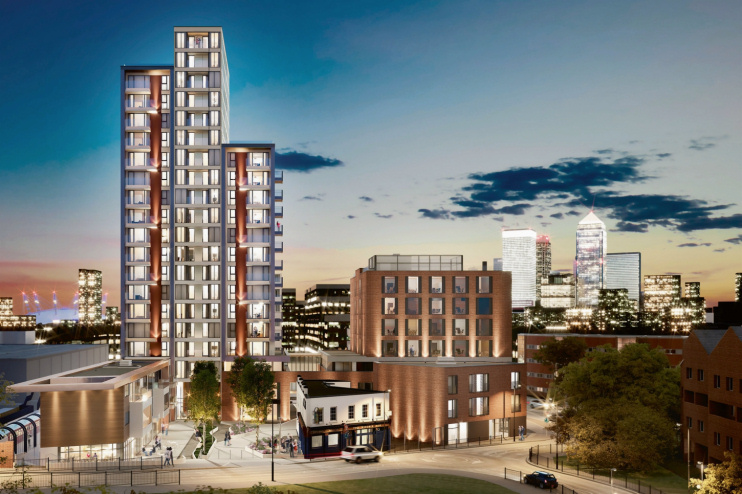 The Widow’s Son, at 75 Devons Road, is also known as ‘the Bun House’. Both names derive from the story of a widow who put aside a hot cross bun for her son, who was on a sea voyage. But he never returned, so she hung the bun from the ceiling in mourning and repeated this act every Easter afterwards.

When a pub was built on the site, around 1848, the publican retained the custom and the annual ‘hanging of the bun’ was made a clause in the lease of the building. Sailors to this day perform the ceremony on Good Friday.

The Widow’s Son has been reinvented as something of a gastropub in recent times. Hidden London doesn’t always approve of such revamps but some kind of improvement was sorely needed at this establishment.

* The picture of Spratts warehouse at the top of this page is adapted from an original photograph, copyright Robert Eva, at Geograph Britain and Ireland, made available under the Attribution-ShareAlike 2.0 Generic Licence. Any subsequent reuse is freely permitted under the terms of that licence.