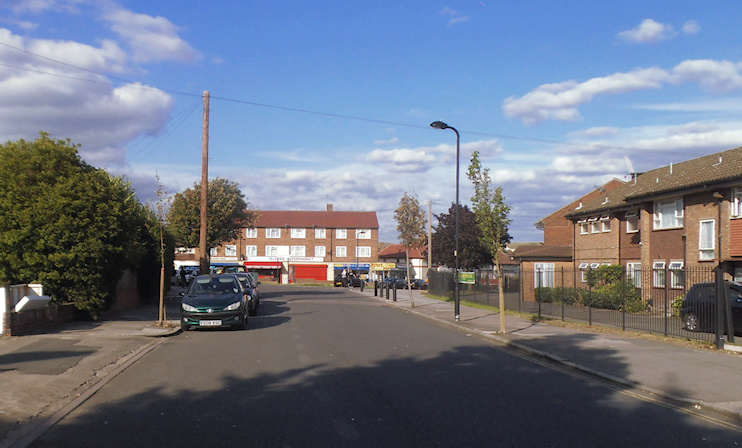 This was probably the ‘spring or stream of a man called Dēormōd (or perhaps Dēormund)’. The presence of a well here was first recorded in the 13th century, and it was reputed to have medicinal prop­er­ties. The plural form ‘Wells’ is a rela­tively recent devel­op­ment, seemingly dating from around the beginning of the 19th century. Nowadays the place name is usually spelt without an apostrophe.

An ‘old moated castle’ called Dorman’s Well may have been built for Edward Cheeseman, cofferer (treasurer) to Henry VII, and was certainly in the posses­sion of Robert Cheeseman on his death in 1547, when a chapel also stood here.

The Dorman’s Well estate subse­quently belonged to the lords of the manor of Norwood and the house is said to have gradually fallen into ruin. Only traces of the moat now survive.

Dorman’s Well had become a manor in its own right by the 18th century, consisting of a 108-acre farm. The present form of the name evolved in the 19th century, when Dormers Wells Farm was owned by the Earl of Jersey, as an outlying part of his Osterley possessions.

Dormers Wells remained little more than a single farm until after the First World War, when devel­opers began to build houses for the lower middle classes. Between 1926 and 1928 more than 700 houses were built in the neigh­bouring hamlet of Mount Pleasant, which lay just to the west and has since been absorbed within Dormers Wells. Boys’ and girls’ secondary schools opened in 1934.

The council built up the area inten­sively from the 1960s, in the form of the Havelock, Windmill and Golf Links estates, which included a number of tower blocks. Problems of depri­va­tion, crime, racism and drug use were wide­spread by the 1980s. As a result of a neigh­bour­hood renewal initia­tive, there has been signif­i­cant new building lately, generally of houses and smaller blocks of flats. Other measures, such as improved security and the instal­la­tion of CCTV networks have made the area safer.

Many of the streets of Dormers Wells are named after British inventors and discov­erers. The local popu­la­tion is mostly of Indian origin or descent and there is also a small Somali community.

Dormers Wells high school has faced obstacles in the past, partly because few of its pupils come from homes where English is the first language – and some have no previous expe­ri­ence of schooling. However, its perfor­mance has improved markedly in recent years and it has also benefited from new school buildings.

* The picture of Telford Road, Dormer’s Wells, on this page is cropped and modified from an original photograph, copyright David Howard, at Geograph Britain and Ireland, made available under the Attribution-ShareAlike 2.0 Generic Licence. Any subsequent reuse is hereby freely permitted under the terms of that licence.