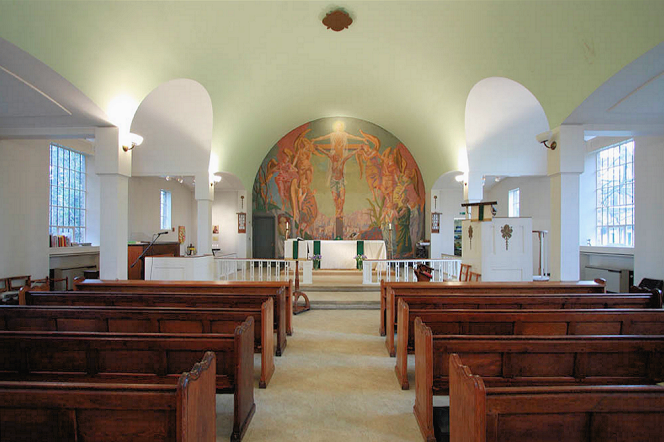 Sometime in the 19th century ‘Downtown’ evolved as a local name for the south-eastern end of Rother­hithe Street. It didn’t appear on any maps until much later (and then rarely) and its residents consti­tuted an isolated community. In 1904 the social reformer George Sims wrote a series of six Strand Magazine articles in which he visited “strange [London] quarters inhabited by strange people” – and he devoted one to Downtown.

The Downtown group of estates were 1930s schemes of mainly three-storey deck-access flats and maisonettes built in a classic municipal style and providing homes for workers at the Surrey Docks. Their surround­ings were wholly dock-related: riverside wharves, pontoons and piers to the east and inland docks, yards and ware­houses to the west.

In the Downtown locality, Lady Dock (and, until it was filled in, Acorn Pond) occupied most of the area west of what is now Salter Road, with the larger (but narrow) Russia Dock further west.

“The rising and swivelling bridges were the only land access to what had become known many years ago as ‘Downtown’ by the residents, mainly dockers and factory workers who lived in the old tenement blocks and two-up, two-down houses and prided themselves on their isolation, and the area was cut off when the bridges were operating and a freighter was passing into or out of the dock system in the centre of the island. The dockyards were always stacked full of timber brought from Russia, Finland and Scandinavia, and in the local pubs in Downtown Rotherhithe weird and wonderful concoctions of drinks could be had and a dozen different languages heard.”

Downtown was very badly affected by bombing in the Second World War. The early-Victorian Trinity church was destroyed by German bombing on the first night of the Blitz and the present Holy Trinity church (shown in the photo above*) was built on its site in the late 1950s. Andie Byrnes’ excellent Rother­hithe Blog has a full history of both churches.

The subse­quent decline of the docks hastened the fate of the estate. Many of the homes had become vandalised squats by the time they came within the purview of the London Docklands Devel­op­ment Corpo­ra­tion in the early 1980s.

Under the terms of the ‘Downtown package’, Southwark council and the LDDC worked with several housing asso­ci­a­tions and devel­opers to fill in the disused docks, demolish the asso­ci­ated struc­tures, build new town­houses and apart­ments and refurbish viable older buildings. All the cul-de-sacs west of Salter Road were created at this time, where there had formerly been no housing at all.

More recently, Barratt London has rede­vel­oped much of the north side of Downton Road as Redwood Park.

* The picture of Holy Trinity, Rotherhithe Street, at the top of this page is adapted from an original photograph, copyright John Salmon, at Geograph Britain and Ireland, made available under the Attribution-ShareAlike 2.0 Generic Licence. Any subsequent reuse is freely permitted under the terms of that licence.