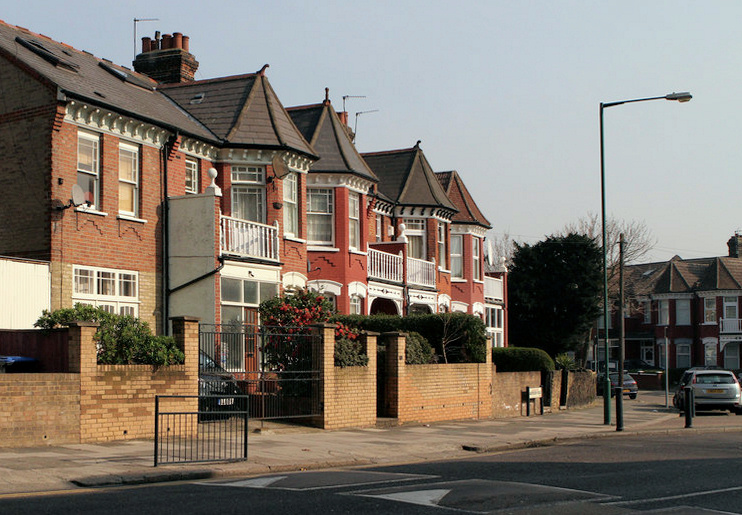 Duddinghill or Dudden Hill field was first recorded in 1363 and the name may be linked to the northern word ‘dod’, which can mean ‘a distinct shoulder or boss of a hill’. A windmill stood in Dudden Hill field from around 1616 until the late 18th century. By the mid-19th century much of the area belonged to Dudden Hill Farm.

Passenger trains began to call at the Midland Railway’s Dudding Hill station in 1875, but the service was abandoned at the turn of the century – just as devel­op­ment was taking off. The Dudding Park Estate Company led this early phase of devel­op­ment. In 1909 the Metro­pol­itan Railway Company opened a station here, which they called Dollis Hill; the naming of the station has been the principal reason for the loss of Dudden Hill’s identity – though it still appears on Ordnance Survey maps.

Dudden Hill Lane was widened in the early 1920s, to allow improved access to the Empire Exhi­bi­tion at Wembley.

Medium-sized semi-detached houses filled the area north of the railway line in the decade before the Second World War. The sequence of streets was supposed to begin with consec­u­tive letters of the alphabet, but last-minute planning changes caused a couple of omissions. The photo above shows houses on Aberdeen Road at its junction with Burnley Road.* There was some industry too, notably a manu­fac­turer of telephone equipment.

Willesden College of Tech­nology opened on Denzil Road in 1934 and took over the buildings of the former Dudden Hill Lane School in 1964. It is now the Willesden campus of the College of North West London, one of the largest further education colleges in the UK.

The Dudden Hill ward has a similar demo­graphic profile to that of Brent as a whole, but with a slightly larger white popu­la­tion and fewer residents of Indian origin, though they are still the largest minority after white British.

* The picture entitled Houses beside Aberdeen Road on this page is cropped from an original photograph, copyright Martin Addison, at Geograph Britain and Ireland, made available under the Attribution-ShareAlike 2.0 Generic Licence. Any subsequent reuse is hereby freely permitted under the terms of that licence.