A business and residential district situated south of Heathrow airport 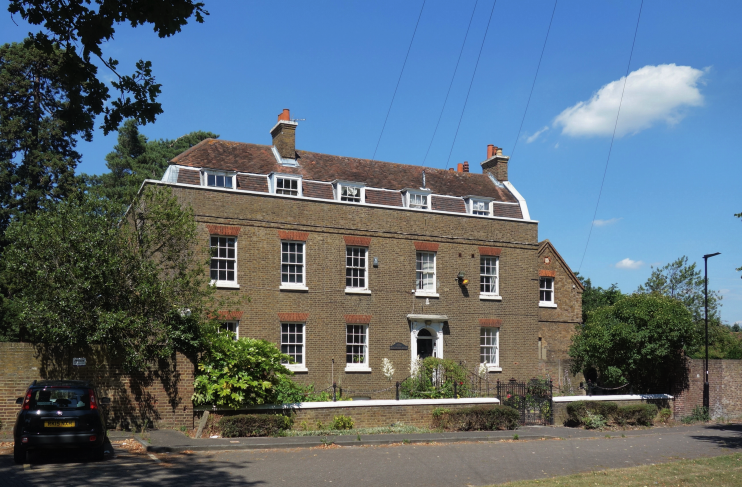 Finds of Roman coins indicate the possible presence of a Roman villa, and the Saxons built a church here.

The manor of East Bedfont was first recorded in the eleventh century and parts of St Mary’s church date from around 1150. In front of the church’s south porch are two ancient yew trees, which were trimmed into the shape of a pair of peacocks in 1704 (and restored to their original glory in 1990). Probably apoc­ryphally, the topiary is said to represent two vain young women, possibly sisters, who used to show off their finery by the church gate, to the irri­ta­tion of humbler worship­pers. Thomas Hood wrote a long poem on the subject.

Facing the green to the east of the church, Burlington House was built in 1791 for William Reed. Shown in the photo above,* this handsome, five-bay house has since been divided into apartments.

During the coaching era, East Bedfont lay at the midpoint on the second stage out of London, between Hounslow and Staines. In 1826 its inns, of which the Black Dog was the most notable, were described as “respectable and yielding good accommodation.”

Until rela­tively recently East Bedfont remained a charming backwater, with cottages and tall trees surrounding the green and pond, and some outlying timber-framed buildings that may be 500 years old.

Expansion towards Feltham altered the local­i­ty’s character in the second half of the 20th century, and the creation of the Bedfont Lakes country park intro­duced an entirely new side to the district in the early 1990s. Former market gardens that had been worked for gravel and then used as landfill sites were inten­sively land­scaped, using 70 million cubic feet of soil to form hills that became the highest point in the borough. This new amenity opened in 1995, with an accom­pa­nying business ‘technopark’ on its northern edge, which attracted corpo­ra­tions such as IBM, Cisco Systems and SAP.

East Bedfont’s resi­den­tial popu­la­tion includes a signif­i­cant Indian minority, though this is smaller than in other parts of the borough. In most other respects, the demo­graphic profile is remark­ably close to the national average. West Bedfont lies just outside the London boundary.

Peter Harvey, the landlord of the Black Dog inn, invented a delicious fish sauce, but resisted all offers to buy its recipe. However, when his sister married a London grocer in 1776, Harvey gave them the recipe as a wedding present and the couple set up a company to market the sauce. Crosse and Blackwell acquired the company in 1920 but no longer makes Harvey’s sauce.

* The picture of Burlington House at the top of this page is adapted from an original photograph, copyright Des Blenkinsopp, and the picture of St Mary the Virgin church is adapted from an original photograph, copyright Graham Newell, both at Geograph Britain and Ireland, made available under the Attribution-ShareAlike 2.0 Generic Licence. Any subsequent reuse is hereby freely permitted under the terms of that licence.