Harrow on the Hill, Harrow 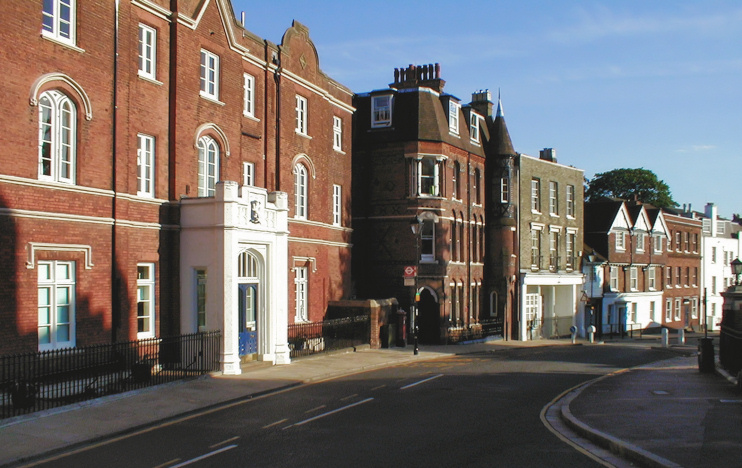 Alter­na­tively spelt as in hyphen­ated form, and later known as Harrow Town, Harrow on the Hill was the site of the original hamlet in the early seventh century. The hill rises to 408 feet above sea level and was crowned by St Mary’s Church from the 11th century. In the Middle Ages the church was one of the most important in Middlesex and was a peculiar of the Arch­bishop of Canter­bury, who had a residence at Sudbury and subse­quently at Headstone. A market was estab­lished in 1226.

John Lyon, a yeoman of nearby Preston, founded Harrow School in 1572, under a charter granted by Elizabeth I. On the comple­tion of the school­house in 1615 just one pupil was on the roll. Prop­er­ties in the village were taken over as boarding houses for the pupils from the late 17th century but Harrow remained just one of many local grammar schools until it achieved a leap in its popu­larity early in the 19th century, and most of the working people in the village were soon serving the school in some way. The school doubled its capacity in 1821, a chapel was added in 1839 and numerous other buildings and purpose-built boarding houses followed.

To the north of the school complex, the station opened in 1880 and the Roxbor­ough and Northwick estates were laid out soon after­wards. By the end of the century, Harrow on the Hill had merged with Greenhill to its north. The junction of Grove Hill and Lowlands Road is said to have been the scene of Britain’s first fatal car accident, in 1899.

With its little shops, tearooms and pubs, the village has changed little since that time, which has led to accu­sa­tions of faux-nostalgia but the effect is delightful nonethe­less. Lower down the slopes of the hill, modern commer­cial premises have inevitably intruded but the school’s extensive grounds have preserved the open space to the east.

In the Harrow on the Hill ward, just over a third of residents are white British (down from half at the 2001 census) and the next largest ethnic sub-group – at 19 per cent – is of Indian descent.

‘Harrow-on-the-Hill’ is the title of a poem by John Betjeman, in which he sees the hill as ‘a rocky island … [with a] churchyard full of sailors’ graves’.