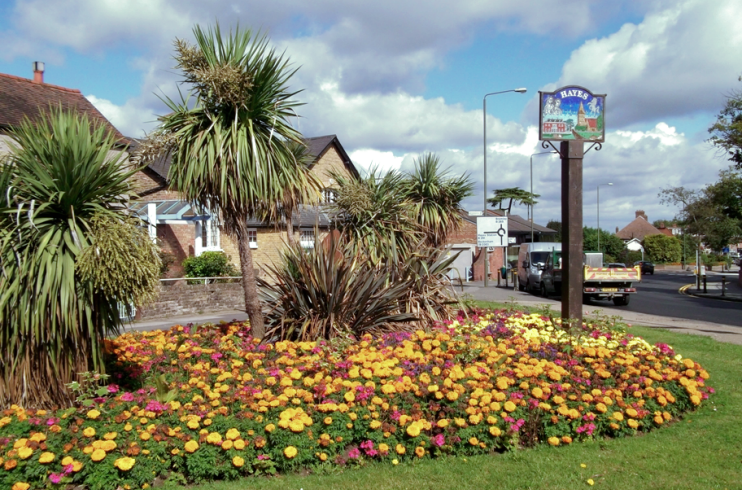 First mentioned in 1177, the name probably meant ‘rough ground covered with brushwood’. Hayes Place was in existence by the 15th century and was rebuilt in the 1750s. By the time the railway arrived in 1882, Hayes was a flour­ishing village of around 600, but prospec­tive commuters were deterred until the line was elec­tri­fied in 1925, almost halving the journey time to Charing Cross.

To cope with the increase in commuter traffic the station was rebuilt in 1935, and Station Approach became the main shopping area. After the Second World War two major devel­op­ments filled in the land between Bromley and Hayes. Bromley council laid out its own Hayes Place estate in the 1950s, with local shops on Chilham Way.

Further north, the Building Design Part­ner­ship completed Hayesford Park in 1965, on the site of Hayes Food Farm. Influ­enced by the garden city movement, Hayesford Park mixes detached houses, bungalows, terraced houses and long blocks of flats, arranged round central shops that have since suffered from their proximity to Bromley.

Hayes is blessed with two broad open spaces. On the south side, Hayes Common is one of the largest areas of unim­proved acidic grassland in London, dotted with impres­sive older houses. To the north-east, Norman Park has extensive sporting facil­i­ties, including Bromley football club’s ground and the home track of Black­heath and Bromley Harriers athletics club.

Like much of the borough, Hayes is comfort­able – but not fabu­lously wealthy – suburbia. Almost 60 per cent of adult residents are married, 90 per cent are owner-occupiers, and 92 per cent are white.

* The picture of Hayes Village Sign and Flower Bed at the top of this page is adapted from an original photograph, copyright David Anstiss, at Geograph Britain and Ireland, made available under the Attribution-ShareAlike 2.0 Generic Licence. Any subsequent reuse is freely permitted under the terms of that licence.