The northernmost part of Harrow’s suburban continuum, separated by the River Pinn from Pinner to the west and Hatch End to the north 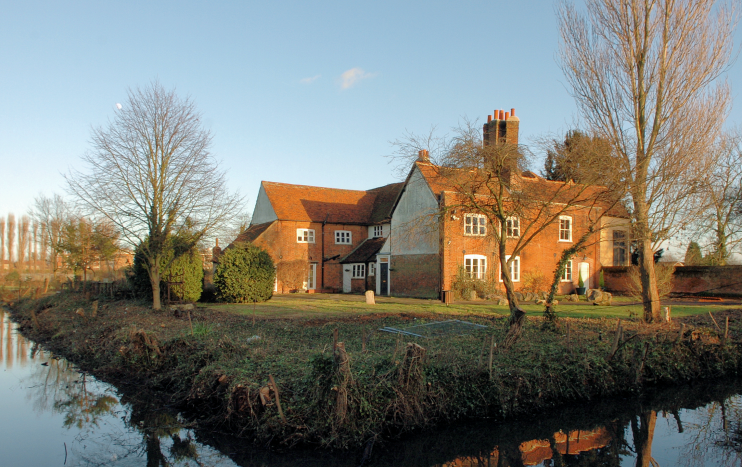 A moated manor house was built here in the 1310s and in 1397 the house became the principal Middlesex residence of the arch­bishops of Canter­bury. A small barn may have been erected at the same time as the manor house, and was later rebuilt at least twice. A much larger tithe barn was added in 1506.

The estate was confis­cated by the Crown in 1546 – and then sold on to a court favourite within a week. The rapidity of the resale means that oft-repeated claims that Headstone Manor “once belonged to Henry VIII” are somewhat specious. The manor house was remod­elled in the 1630s, given an extra wing in the 1650s and further altered in 1762. However, it was subse­quently used simply as a farmhouse and was allowed to deteriorate.

Suburban devel­op­ment began to spread towards Headstone from Weald­stone in the 1880s, although a race­course continued to operate here until 1899, when it was suppressed after a riot was “started by Londoners.” St George’s church was conse­crated in 1911 and Headstone Lane station opened in 1913. After the First World War private builders filled most of central Headstone’s surviving gaps but Headstone Manor and 63 acres of its grounds were saved by Hendon council – which was at that time respon­sible for this area.

Hendon’s successor the London Borough of Harrow restored Headstone Manor’s great barn in 1973 and opened it as a heritage museum, with an espe­cially strong collec­tion of ceramics and glass. An 18th-century granary that orig­i­nally stood at Pinner Park Farm was restored and relocated at Headstone Manor in 1991. The manor house itself, however, lay semi-derelict for three decades, although enough preser­va­tion work was been done to permit guided tours to be offered on summer weekends.

With financial support from the Heritage Lottery Fund the restora­tion of the manor house and its barns was completed in 2017.

Away from the heritage zone, suburban Headstone is a rela­tively affluent place, partic­u­larly the Headstone North ward. The principal ethnic groups are of white British and Indian origin or descent, primarily adherents to Chris­tianity and Hinduism.