A hamlet and its outlying farms, situated north of Harefield, beyond the hospital 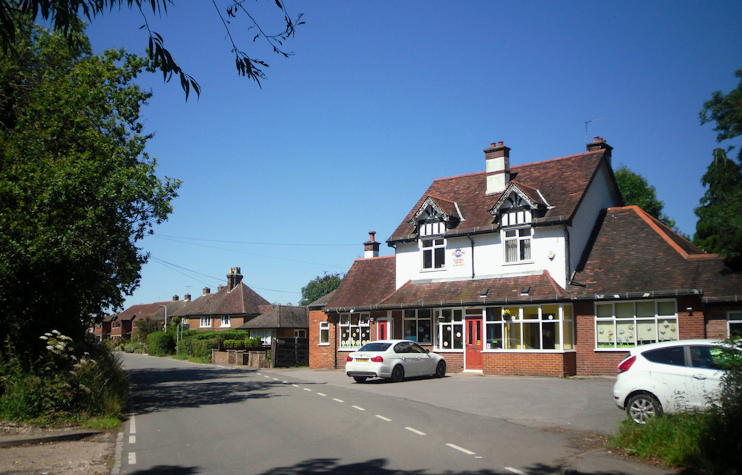 Although Hill End stands on rela­tively high ground, the name may derive from a former landowner rather than a topo­graph­ical feature. However, if the name does refer to the latter, then the partic­ular hill in question was probably One Tree Hill, which is located west of the hamlet, near the Canal Way devel­op­ment at the top of Summer­house Lane.

There was a group of houses in what is now Hill End by 1754 and in the latter half of the 19th century a number of cheap cottages were built for workers who were toiling in the nearby chalk, gravel and sand pits and at the brickworks.

Quarrying and brick­making are thirsty work and two pubs opened within a few doors of each other. The Vernon Arms was in existence by 1866 and it was joined by the Plough c.1890 – by which time the hamlet had made its first appear­ance on an Ordance Survey map, orig­i­nally as Hillend.

Most of the present housing was built in the second half of the 20th century and is clustered across the road from an unex­citing village green with a pond and a basically equipped play­ground. Nowadays a signif­i­cant propor­tion of the hamlet’s popu­la­tion are residents of the purpose-built Harefield care home.

The Vernon Arms was sold by Courage in 1974 and used for resi­den­tial purposes until around 1986, when the building was knocked down and replaced by four houses. Having spent its latter days as a children’s nursery (shown in the photo above*), the Plough was demol­ished at the end of 2015 and replaced by a terrace of three houses.

The area’s oldest surviving buildings are on Spring­well Lane: Cripps Farmhouse (probably late 16th century, but much altered since) and the timber-framed barn to its immediate south-east. Click here for a bird’s eye view. The weath­er­boarded Cripps Farm Cottage was pulled down c.1950.

Farther up Spring­well Lane the narrow­boats strung along the canal draw the eye from the ramshackle workshops and the disused landfill facility at an old quarry.

According to 2011 census details for the Hill End output area the vast majority of residents are white British and more than two-thirds are homeowners.

The disused gravel and chalk pits around Springwell Lane have doubled as alien landscapes in several low-budget TV productions, notably early seasons of Dr Who.

* The picture of the former Plough public house at the top of this page is adapted from an original photograph, copyright Des Blenkinsopp, at Geograph Britain and Ireland, made available under the Attribution-ShareAlike 2.0 Generic Licence. Any subsequent reuse is hereby freely permitted under the terms of that licence.