A large, self-contained village – and a world famous hospital – situated in the far north-western corner of Greater London 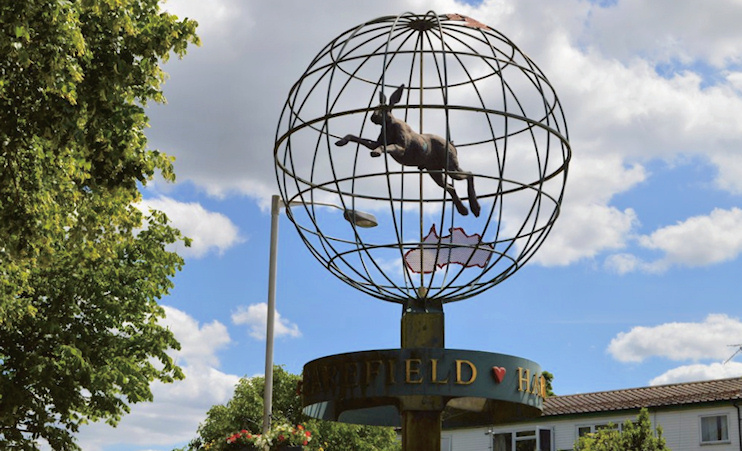 Neolithic remains have been found in the parish, as well as fossils in the chalk. Notwith­standing the ‘hare of Harefield’ shown in the picture above, the settle­ment’s name probably derives from the Old English words here (army) and feld (open space; field). The name may thus allude to an encamp­ment by a Viking army during the Danish invasions of the 10th and early 11th centuries.

St Mary’s church is of 13th-century origin and is noted for its wealth of monuments. During the Middle Ages and 16th century much of the parish consisted of moors and common land, with the culti­vated lands of Harefield manor around the village.

The 18th and 19th centuries saw the growth of several estates on which country houses were built, including Belham­monds, also known as Harefield Park, a three-storey, seven-bay mansion dating from the 1710s. Two centuries later it became the orginal home of Harefield Hospital (see below) but now stands disused and in need of restora­tion. Click here for a Bing bird’s eye view of the mansion.

The construc­tion of the Grand Junction (now Grand Union) Canal on the western side of the parish at the end of the 18th century changed the character of this part of Harefield.

By 1813 limekilns and copper mills lay along the northern part of the canal, and there were coal wharves north of Moorhall. The indus­trial area continued to expand throughout the century, but away from the canal Harefield remained one of the few places in Middlesex where the ancient pattern of an agri­cul­tural village survived into the second half of the 19th century, mainly because of the absence of a main road or railway.

By the outbreak of the First World War houses were being built by the mills, around Hill End, along the main roads and round the village green. Large sand and gravel workings operated on the outskirts of Harefield between the wars but most of these are now disused or have become landfill sites, while much of the canalside industry has been replaced by offices and other business premises.

Uxbridge council built nearly 500 houses between 1919 and 1951 around the common and in Northwood Road, and in South Harefield and Mount Pleasant. Subse­quent devel­op­ment, both public and private, has been tightly constrained by the inclusion of almost all the surviving farmland within the green belt.

Harefield village retains a genuinely rural character, though a fifth of its housing is owned by Hillingdon council. The popu­la­tion is 88 per cent white and educa­tional attain­ment is rela­tively low. Car ownership is high, as it needs to be out in the sticks.

The story of Harefield Hospital

During the First World War a hospital was estab­lished at the mansion latterly known as Harefield Park for the treatment of injured Australians and New Zealan­ders. Many of those who died at the hospital are buried in the church­yard of St Mary’s Harefield, where they are commem­o­rated by a memorial arch and a granite obelisk.

In the 1930s Harefield became an isolation hospital for tuber­cu­losis patients, laying the foun­da­tions of its expertise in lung condi­tions. In the late 1940s the hospital became part of the new National Health Service and began to develop its expertise in heart disease, in addition to its lung specialisation.

Professor Sir Magdi Yacoub performed Harefield’s first heart trans­plant in 1980 and the world’s first combined heart and lung trans­plant in 1983. Since then the hospital has had a distin­guished history of ground-??breaking advances, most recently exem­pli­fied in its work on ‘arti­fi­cial hearts’ and minimally invasive proce­dures. Hare­field’s dedicated Heart Attack Centre deals with cardiac emer­gen­cies from outer north-west London, and provides one of the fastest arrival-to-treatment times in Europe.

In 1998 Harefield was twinned with another renowned London chest hospital to form the Royal Brompton & Harefield NHS Trust. Plans to incor­po­rate Harefield’s facil­i­ties on the site of a new ‘super-hospital’ at Paddington Waterside fell apart in 2005.

* The picture of the Hare of Harefield at the top of this page is slightly modified from an original photograph, copyright Matt Brown, at Flickr, made available under the Attribution 2.0 Generic licence. Any subsequent reuse is freely permitted under the terms of that licence.