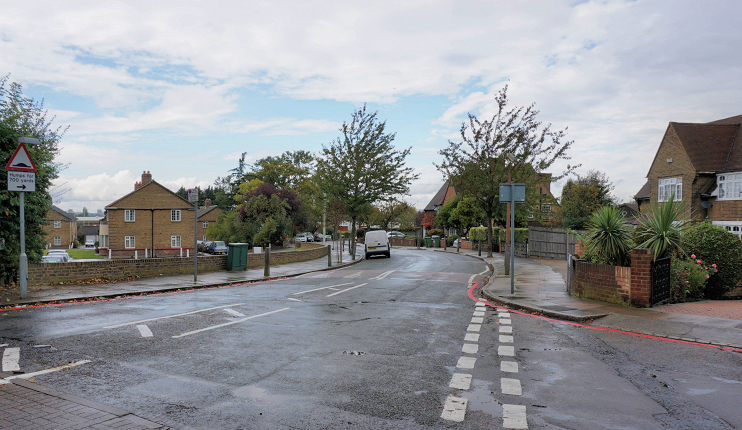 The 12th-century manor formed a bulge in the boundary of Eltham parish, so ‘horn’ may have been used in its sense as a ‘projecting corner’.

The 345 acres of West Horne, as it was then known, were enclosed in the 15th century as one of three parks that belonged to Eltham Palace. The park keeper of 1481 had a moated lodge with a dairy, barn, stable, garden and orchard.

By the end of the 17th century the estate had been ‘disparked’ and converted to arable land, meadow and pasture. Around 1860, the silk merchant Thomas Blenkiron acquired Horn Park and used the farm for grazing racehorses.

A new owner planted orchards at the beginning of the 19th century. The farmhouse stood near the present-day junction of Alnwick Road and Horn­castle Road, at the centre of the map below. The fruit farm’s lease expired in 1930 and the first streets were laid out by private devel­opers in the vicinity of Horn Park Lane, which is shown in the photo­graph above.*

In 1936 Woolwich council cleared the orchards and began to build 198 homes as the first stage of the Horn Park estate, with early tenants coming from the more crowded parts of the borough. The estate was half-finished by the outbreak of the Second World War.

Building resumed at a rapid pace when hostil­i­ties ceased, including some prefab­ri­cated bungalows that survived for almost two decades. The completed estate consisted of some 1,100 homes.

The London County Council built Horn Park primary school on Alnwick Road in 1949, making this one of the first new schools to open in London after the war. The original buildings have since been replaced.

Since 1964 Horn Park has been the home of Colfe’s school. It was founded in Lewisham in 1652 by the Reverend Abraham Colfe with assis­tance from the Leathersellers’ Company. The school became inde­pen­dent in 1977. It has sections for children of all ages and is nowadays fully co-educational.

* The picture of Horn Park Lane on this page is adapted from an original photograph, copyright Bill Boaden, at Geograph Britain and Ireland, made available under the Attribution-ShareAlike 2.0 Generic Licence. Any subsequent reuse is hereby freely permitted under the terms of that licence.