A small outpost of Cudham, which lies half a mile to the north, Horns Green is London’s most south-easterly settlement 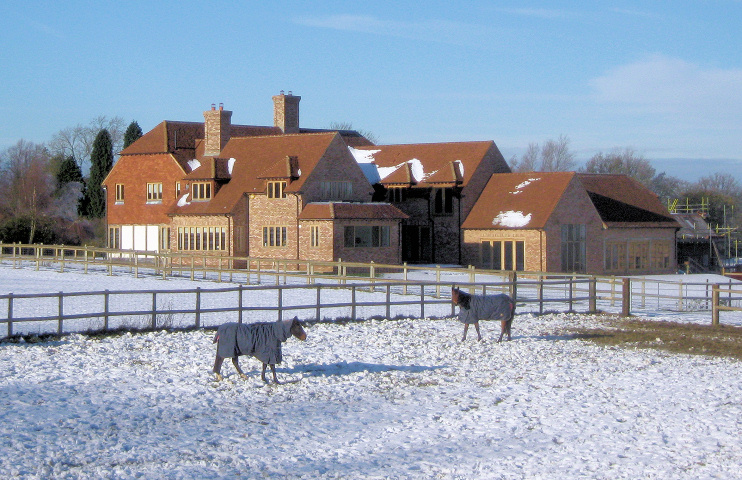 Horns Green is situated on high ground, gently rising into the North Downs. The centre of the hamlet is 216 metres (709 feet) above sea level.

David Mills, in his Dictio­nary of London Place Names, says that Horns Green’s identity is “to be asso­ci­ated with the family of John de Horne, 1292, whose name derives from Old English horn, ‘a horn-shaped feature, a projecting piece of land’.”

This locality was part of the extensive Kentish land­hold­ings of the earls of Derby. The 17th earl sold the Cudham portion of the family’s estates in 1909. From around the time of this sale Horns Green grew rapidly in size, by the standards of a tiny village, but its expansion was halted by the post-war creation of the green belt.

Nowadays, Horns Green has several 19th-century houses and cottages in Kentish flint and brick, a few unex­citing bungalows and a handful of executive homes built in the late 20th and early 21st centuries, and set well back from the road. The newer resi­dences have all replaced prop­er­ties that were built before the intro­duc­tion of green belt restrictions.

According to Historic England, Horns Green’s most precious property is Flint House. The grade II listed building dates from either the late 18th or early 19th century. Rowan Cottage, Tiny Cottage and Good­friday Farm are locally listed. A short distance to the south, Portlands, its oast house and drying shed, stable buildings and neigh­bouring cottage are also grade II listed – but now we have crossed from the borough of Bromley into the district of Sevenoaks, and are thus no longer in London.

The most recent and grandiose of the modern struc­tures is Cedar Farm, a six-bedroom mansion that has replaced a real farm. In 2009 Bromley council’s chief planning officer recom­mended that enforce­ment action be autho­rised to secure the removal of its unap­proved outbuild­ings, which were “clearly excessive in size and harmful [to the integrity of the green belt] in their design, bulk and materials.” The above photo­graph of Cedar Farm was taken in December 2010.*

London’s premier blogger Diamond Geezer has ques­tioned whether Horns Green “tech­ni­cally exists” at all, given that cartog­ra­phers are the only people who appear to know of it. No one who lives here seems to mention Horns Green as their address (except at Horns Green Cottage), prefer­ring to refer to either Cudham or Knockholt.

* The picture of Cedar Farm on this page is adapted from an original photograph, copyright David Anstiss, at Geograph Britain and Ireland, made available under the Attribution-ShareAlike 2.0 Generic Licence. Any subsequent reuse is hereby freely permitted under the terms of that licence.