A genteel residential suburb situated between Uxbridge and Ruislip 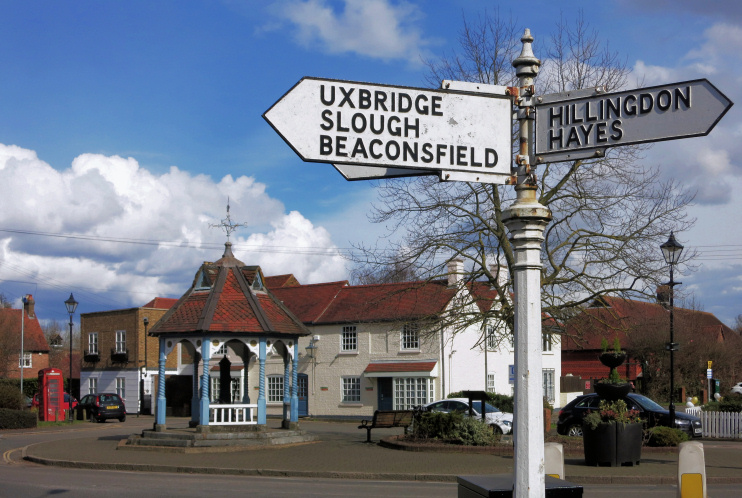 Exca­va­tions at Long Lane playing fields have produced evidence of a possible Iron Age settle­ment, super­seded in the late first century AD by an extensive multi-phase field system, which was modified over the following three centuries.

The estate was first recorded in Domesday Book as Ticheham, ‘the farmstead of a man called Ticca’. St Giles’ church was in existence by the mid-13th century and the oldest part of the present building dates from the 1330s.

Three substan­tial homes built from the 16th century onwards survive today: the modest manor house; Sir Edward Wright’s osten­ta­tious Swakeleys House, completed in 1638 and shown in the photo­graph below; and the mid-18th century Ickenham Hall, to which the Compass Theatre is now attached.

Charlotte Gell estab­lished almshouses, which were built in 1857 on land she had donated, and bequeathed funds for the construc­tion of the canopied village pump, which was installed in 1866 and is visible in the photo­graph at the top of the page.*

The opening of a halt on the Metro­pol­itan Railway in 1905 failed at first to alter the character of the village but the sale of most of the Swakeleys estate in 1922 hastened Ickenham’s entry into Metroland.

The Drummond estate was laid out in the north, shops were built in Swakeleys Road, and Princess Victoria opened the village hall in 1927.

Several more housing estates followed in the 1930s, including the Glebe, Swakeleys and Ivy House, while the so-called ‘Ickenham garden city’ took the place of Milton Farm.

More private devel­op­ments filled out the suburb in the 1950s and 1960s, after which vigilant protec­tion of the green belt prevented further incursions.

A proposal to build a national exhi­bi­tion centre on Ickenham Marsh met with local oppo­si­tion and the scheme went instead to Birm­ingham. Swakeleys House was restored and converted to offices in the early 1980s. Its grounds are the setting for the main events of the annual Ickenham Festival and are also open to the public on Open House weekend.

By far the most signif­i­cant recent resi­den­tial project has been the creation of Ickenham Park, on the site of the former RAF West Ruislip.

Only the very centre of the old village remains well preserved, although on the outskirts there are three moated sites that are scheduled ancient monuments. Ickenham Marsh, managed by the London Wildlife Trust, has open oak woodland and scattered scrub, with damp meadows and marsh bordering Yeading Brook. Ickenham Green has an area of unim­proved acidic grassland.

Sixty-three per cent of Ickenham’s adult residents are married, a very high propor­tion. At 41.9 years, the average age is signif­i­cantly higher than the national norm.

In 1665 Samuel Pepys visited Sir Robert Viner at Swakeleys, afterwards recording in his diary that Sir Robert “showed me a black boy that he had, that died of a consumption, and being dead, he caused him to be dried in an oven, and lies there entire in a box.”