A large, municipally built estate in the part of north Poplar once known as Poplar New Town 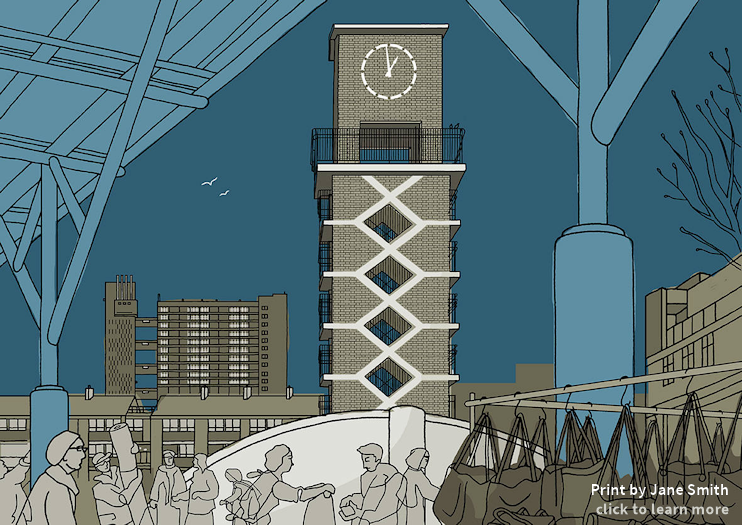 Wartime bombing destroyed or damaged nearly a quarter of the buildings in this area, which was one of the first be rede­vel­oped by the London County Council after hostil­i­ties ended. The new estate was named after George Lansbury (1859–1940), a borough coun­cillor and a local hero for his ‘Poplarist’ campaign demanding that London’s richer boroughs should subsidise the poorer ones. He subse­quently became Labour MP for Bromley and Bow and led the Labour oppo­si­tion from 1931 to 1935.

In 1951 the barely finished Lansbury estate became the ‘Live Archi­tec­ture Exhi­bi­tion’ of the Festival of Britain. Critics were generally under­whelmed by the project, with one or two notable excep­tions. Writing in The New Yorker in 1953, Lewis Mumford remarked, “I shall be surprised if Lansbury is not one of the best bits of housing and urban planning anywhere.”

Created to serve the residents of the Lansbury estate and shown in the image above, Chrisp Street market was the first specially designed pedes­tri­anised shopping centre in the UK.

More housing schemes filled out the area over the next three decades, including the large blocks of Lansbury West. 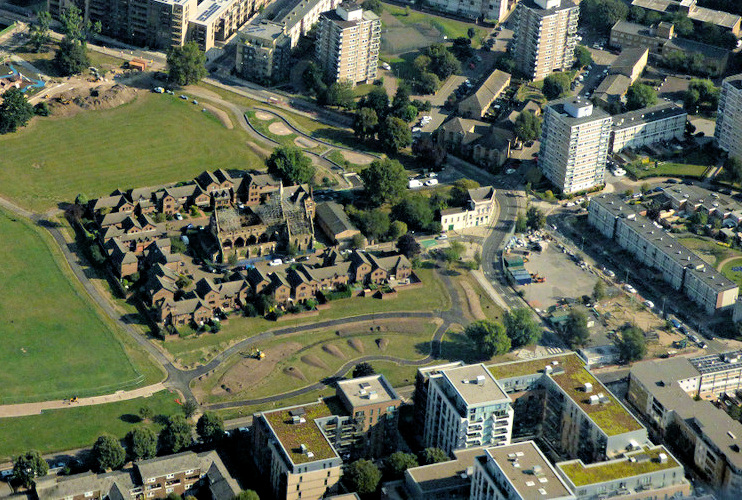 Visible in the aerial photo above, the Victorian church of St Saviour was declared redundant in 1984 and very badly damaged by fire in 2007. The church is encircled by the Arcadian scheme of self-built houses, of the late 1980s. Named after a former vicar of St Saviour’s, the neigh­bouring Bartlett Park is Lansbury’s largest open space.

Much of the Lansbury estate had become run-down when Tower Hamlets trans­ferred ownership and manage­ment to a housing asso­ci­a­tion at the end of the last century, when a regen­er­a­tion programme began.

Opened in 2004, Chrisp Street Idea Store is a mix of library services, learning spaces, IT and a café housed in a glass box near the corner of East India Dock Road.

* The picture of the church of St Saviour from the air on this page is cropped from an original photograph, copyright Thomas Nugent, at Geograph® Britain and Ireland, made available under the Attribution-ShareAlike 2.0 Generic Licence. Any subsequent reuse is freely permitted under the terms of that licence.