A lake and its vicinity located just inside London’s border with Buckinghamshire, north-west of Yiewsley 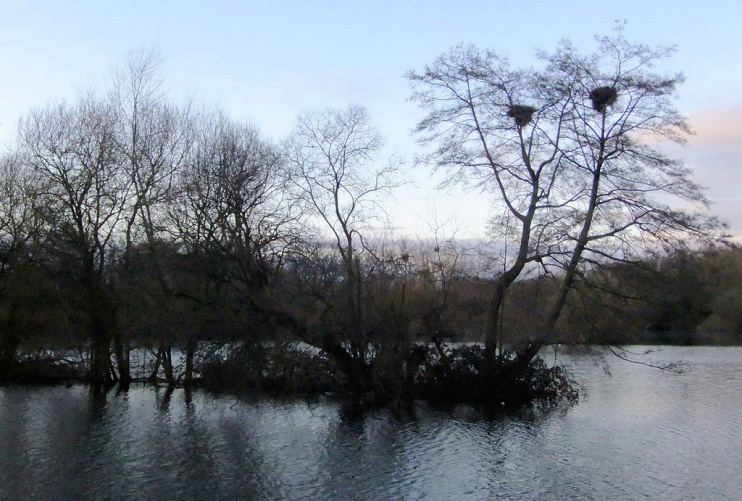 Little Britain’s identity first appeared in print on the far western edge of Green­wood’s map of Middlesex, published in 1819. It is possible that the name derives from the vaguely Britannic shape of the ‘island’ formed by the River Colne, Fray’s River and the Slough arm of the Grand Union Canal. Alter­na­tively, it could have been a whimsical nickname for a tiny settle­ment or have been borrowed (for some unknown reason) from the City of London street called Little Britain.

The terrain here is flat and rela­tively low: around 90 feet (27–28 metres) above sea level throughout the locality. There were houses on Packet Boat Lane and Old Mill Lane by 1864. Since at least this time the narrow bridge carrying Packet Boat Lane across Fray’s River has been called Little Britain Bridge.

The ‘old mill’ at what was then the northern end of Old Mill Lane was Yiewsley Mill, which ground flour until it burned down in 1873. The neigh­bouring mid-19th century millhouse has survived to the present day and is a locally listed building.

In the late 19th century Yiewsley’s St Matthew’s church estab­lished a mission room at Little Britain but this did not last long.

Little Britain Lake was created following gravel extrac­tion in the early 1930s. The lake covers approx­i­mately 14 acres and is sand­wiched between Old Mill Lane to its east and the winding River Colne (which also forms the border with Buck­ing­hamshire) to the west.

The lake’s arti­fi­cial islands were made from hornbeam and birch stakes, combined with woven rooting willow, to provide a safe habitat for waterfowl.

Little Britain Lake has been the respon­si­bility of the London Borough of Hillingdon since 1983, following a period when it was leased to a private tenant who controlled its angling rights.

Much of the Little Britain area now forms part of the Colne Valley Park, which was estab­lished in 1965. In addition to its wildlife walks, an asphalt path laid around the western edge of the lake in 2005 is espe­cially suitable for users of wheel­chairs, mobility scooters and for people with impaired mobility.

Little Britain is desig­nated a site of impor­tance for nature conservation.

On the far bank of the Grand Union Canal, north of Packet Boat Lane, Union Park was built in the 1990s as a commer­cial office estate. Regen­er­a­tion specialist London Green acquired “this large unloved business park” in February 2015 and obtained planning consent for its rede­vel­op­ment with 251 resi­den­tial units and asso­ci­ated land­scaping, including an extensive upgrade of the canal towpath.

The geograph­ical extent of the Little Britain locality is not well defined. On most maps its name has histor­i­cally appeared north of Packet Boat Lane and east of Fray’s River, but sometimes west of the river. However, on current Ordnance Survey maps the Little Britain name is placed close to Packet Boat Marina and the Slough arm of the Grand Union Canal.

The locality is very sparsely populated. Its few residents are predom­i­nantly white British; living standards are rela­tively high; most house­holders own their own home and have access to at least one car.

* The picture of herons’ nests in alders at the top of this page is adapted from an original photograph, copyright Stefan Czapski, at Geograph Britain and Ireland, and the lower picture of Little Britain Lake is cropped from an original photograph, copyright Andrew Bowden, at Flickr, both made available under the Attribution-ShareAlike 2.0 Generic licence. Any subsequent reuse is freely permitted under the terms of that licence.
The above article previously included the assertion that Little Britain was so named because of the shape of the lake. Hidden London now realises that this could not have been the case, given that the place name predated the lake’s existence by more than a century. The lake’s area has also been corrected in this updated version of the article. Apologies for the former errors.