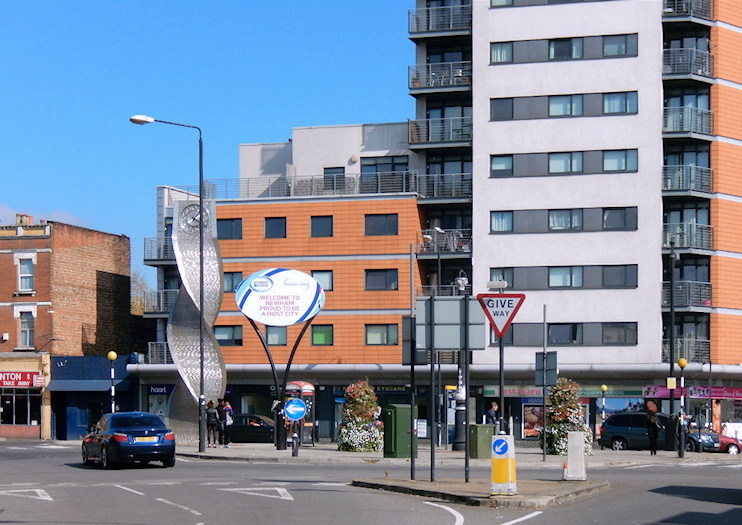 In 1638 the Ilford-based merchant Richard Lee migrated to America, where he acquired an estate at Maryland Point on the Potomac River. After 20 years he returned to Ilford and bought land at Stratford, where he built a house that he called Maryland Point. The house was assessed for nine hearths in 1662, indi­cating that it was a building of substan­tial propor­tions. It was sold in 1678 and its subse­quent fate is not known.

Maryland Point first appeared as a place name on a map of 1696 and Daniel Defoe mentioned the existence of a ‘new’ settle­ment here in 1722.

With the growth of Stratford in the mid-19th century the vicinity was built up as Stratford New Town and Maryland gained a pros­perous shopping thor­ough­fare. Maryland station opened in 1874.

Following steady decline over the course of the following century the area took on a low-rent aspect. The 23-storey Henniker Point was erected in 1969.

Private apartment blocks have been built near the station in recent years and the Stratford Time Spiral was relocated to the northern end of Maryland traffic island in 2011. The sculpture is visible in the photo­graph above.*

In 2016 the London Borough of Newham chose Mary­land’s Chatsworth Road as the site for six new homes, the first in 30 years to be built directly by the council.

Maryland station’s facil­i­ties were upgraded in advance of the inau­gu­ra­tion of Elizabeth line (Crossrail) services.

Despite a sprin­kling of gentri­fi­ca­tion, there are signif­i­cant levels of social need among the local popu­la­tion, which includes a high propor­tion of immi­grants, both black and white, the latter mainly from eastern Europe.

At Maryland primary school, Ofsted’s 2010 inspec­tion report found that 53 nation­al­i­ties and 47 languages were repre­sented. Similar but less pronounced diversity exists at St Francis’ RC and Colegrave primary schools. The latter was rated outstanding by Ofsted in 2017; conse­quently it probably won’t be inspected again for a very long time.

On the death of Maryland’s Richard Lee in 1664, his family returned to America, apparently in fulfilment of the conditions of his will. Lee’s grandson Thomas established a plantation in Virginia in the late 1730s, which he named Stratford Hall, and this was the birthplace in 1807 of Thomas’s grandson Robert E Lee, the most successful general of the Confederate forces during the American Civil War.

* The picture of Leytonstone Road, Maryland, on this page is adapted from an original photograph, copyright Stephen McKay, at Geograph Britain and Ireland, made available under the Attribution-ShareAlike 2.0 Generic Licence. Any subsequent reuse is freely permitted under the terms of that licence.