An up-and-coming commercial and residential centre situated north-west of West Ham, of which it was once a part 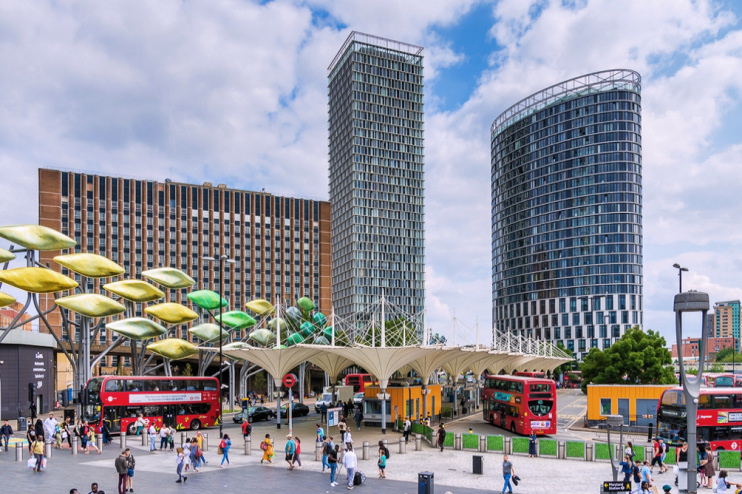 Cister­cian monks founded Langth­orne Abbey in the marshes near the River Lea in 1135 and it became one of the richest religious houses in England. The village that grew up east of a ford across the Lea was known as Stratford Abbei or Stratford Langth­orne to distin­guish it from Stratford atte Bow, on the other side of the river. It was also called Stratford Hamme – a reference to its inclusion within what became the parish of West Ham.

The construc­tion of Bow Bridge attracted early agri­cul­tural industry. The village became a centre for the slaughter of livestock brought from East Anglia and for baking bread, using corn ground at the riverside mills on Stratford Marsh – such as the one that gave its name to Pudding Mill Lane.

From the 18th century efforts were made to unite some of the channels of the River Lea that criss-crossed the marsh, notably via the creation of the Lee Navi­ga­tion.* This reduced the number of crossing points required along Stratford Causeway, now the south-western end of the High Street.

In 1844 (the year the poet Gerard Manley Hopkins was born here) the Metro­pol­itan Building Act forced noxious indus­tries to move outside London – and Stratford was the first place across the border in Essex, with good road and water connec­tions into the city. Existing mills, distil­leries and breweries were joined by engi­neering works, printers, ink and dye works and every kind of processor of coal, oil, manure and animal bones.

George Hudson estab­lished the Eastern Counties Railway’s loco­mo­tive works here in 1847 and railway workers’ housing was built at what became known as Stratford New Town. From 1867 the Carpen­ters’ Company began to develop the land it held around present-day Carpen­ters Road with a mix of factories and housing.

The town centre was built up with shops, public houses, places of enter­tain­ment and municipal insti­tu­tions in the late 19th and early 20th centuries. The best surviving examples from this period are on the south side of the Broadway.

Over the course of the 20th century a mish-mash of utilities, ware­houses, yards and scrapheaps filled most of Stratford Marsh, while diverse natural habitats flour­ished by the waters’ edges.

In 1965 Stratford became the seat of govern­ment for the newly created borough of Newham, and the council soon set about demol­ishing much of the old town and replacing it with a lack­lustre shopping centre and municipal tower blocks.

More sympa­thetic regen­er­a­tion around the turn of the 21st century brought an almost metro­pol­itan style to parts of the town centre, espe­cially around the compact cultural quarter, which has the Theatre Royal Stratford East and the Stratford East Picture­house.

Elsewhere in the district, signs of gentri­fi­ca­tion were already evident when London’s successful bid to host the Olympic Games heralded the complete trans­for­ma­tion of the Lower Lea Valley.

Among the most distinc­tive new resi­den­tial devel­op­ments are Stratford Halo (if only for its 43-storey height) and Telford Homes’ Icona (shown above), with eleva­tions inspired by the work of Donald Judd. Even the down-at-heel Maryland locality has gained a sprin­kling of upmarket apartment blocks.

The first trains arrived at Stratford Inter­na­tional station in 2009 and the neigh­bouring Westfield Stratford City became London’s largest shopping mall when it opened in 2011. Stratford is now one of the ten busiest mainline stations in Britain, with more passenger exits and entries than the termini at Fenchurch Street, Maryle­bone or even St Pancras. It’s also one of the ten busiest tube stations.

Stratford’s property values saw some of the biggest increases in London in the early 21st century and its appeal has continued to grow with the opening of the Queen Elizabeth Olympic Park, the launch of East Village and the proposed rede­vel­op­ment of the Carpen­ters’ Estate.

* The Lee Navigation is named by acts of Parliament and is so marked on Ordnance Survey maps. Constructed elements and human features are spelt ‘Lee’, such as the canal system and Lee Valley Park. The un-canalised river is spelt ‘Lea’, along with other natural features such as the Lower Lea Valley.

The picture of Stratford bus station at the top of this page is slightly modified from an original photograph, copyright Ian Capper at Geograph Britain and Ireland, made available under the Attribution-ShareAlike 2.0 Generic Licence. Any subsequent reuse is freely permitted under the terms of that licence.