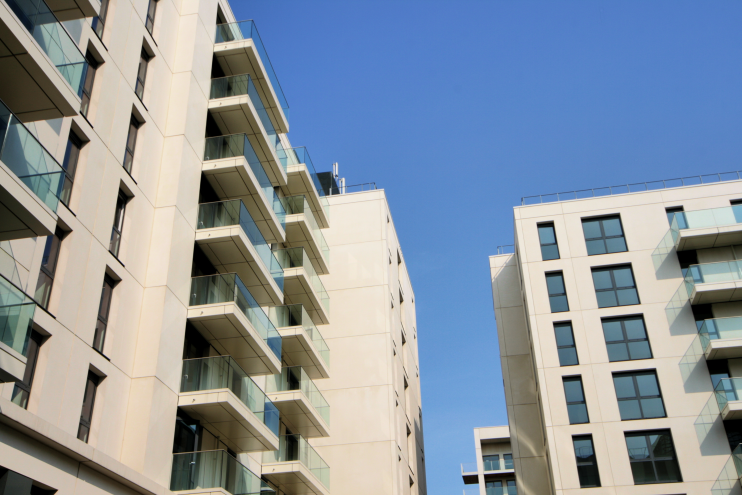 In the Middle Ages the marshy land here belonged to the Knights Templar, who derived income from water­mills beside the River Lea and its trib­u­taries. The area became known as Temple Mills, a name that endured long after the disso­lu­tion of the crusaders’ order in 1312.

The surviving mills were demol­ished in the latter part of the 19th century, when the Great Eastern wagon works were moved north­wards here from Stratford. By the late 1950s this had become the biggest railway works in Britain. The principal occupants of the meadows beyond the rail yards were a pair of ‘arti­fi­cial manure works’.

British Rail added a Freight­liner terminal in the 1970s, by which time the entire area now occupied by East Village had filled with engi­neeering works and depots, sheds, sidings and ware­houses, with dozens of railway lines connecting them.

The railway industry progres­sively withdrew from Temple Mills over the closing years of the 20th century and the property developer Chels­field devised a £4 billion scheme to create a ‘major metro­pol­itan centre’ called Stratford City on the vacant site, with a shopping and leisure zone and thousands of homes and asso­ci­ated amenities.

Outline planning permis­sion for the scheme was granted early in 2005 but every­thing changed a few months later when the Inter­na­tional Olympic Committee approved London’s bid to host the 2012 summer Olympics, with purpose-built venues to be located in the Lower Lea Valley, north-west of Stratford.

Stratford Inter­na­tional station opened in 2009 and gained a Docklands Light Railway connec­tion two years later. The southern part of the Stratford City site was developed as a Westfield shopping mall, which opened in September 2011. The resi­den­tial project that had been proposed for the larger, northern sector was replanned as the Olympic athletes’ village.

The athletes’ apart­ments and the surrounding envi­ron­ment have since been remod­elled as the new township of East Village.

Completed in late 2013, the ‘village’ has 2,818 homes, spread across eleven devel­op­ments designed by 16 archi­tec­tural part­ner­ships and mostly consisting of sets of eight-to-twelve storey blocks built around courtyards.

The complex financial and legal history of the project (which is too messy to chronicle in this article) has resulted in an unusual division of tenure here. Just under half the homes were clas­si­fied as ‘afford­able’ and have been sold or rented by Triathlon Homes under the condi­tions applic­able to such schemes. The remainder of the homes were made available by Get Living London for private rental, but not for sale.

There’s an emphasis on green living (low CO2 emissions, water recycling, lots of spaces for bicycle parking, etc.) and on greenery in the surround­ings, with five park areas and 3,000 newly planted trees, including an orchard with apples, plums and pears that residents can pick.

All the apartment buildings have ‘living roofs’, designed to encourage wildlife. On the west side of the village, the Water­glades is a 6‑acre area with ponds and swamps, created as a habitat for native biodiversity.

Local amenities include shops and cafés, a health centre and Chobham academy, which opened in September 2013 and will ulti­mately cater for 1,800 students aged 3 to 19 years.

To the north of East Village, Taylor Wimpey is presently building a new neigh­bour­hood called Chobham Manor E20. When completed it will consist of around 850 homes, community facil­i­ties, shops and 1,500 square metres of publicly acces­sible open space. The L&Q housing asso­ci­a­tion is respon­sible for the devel­op­ment’s shared ownership properties.