A scattered collection of small farms and civic amenities situated north of Ickenham and west of Ruislip, and surrounded on all sides by green-belt farmland 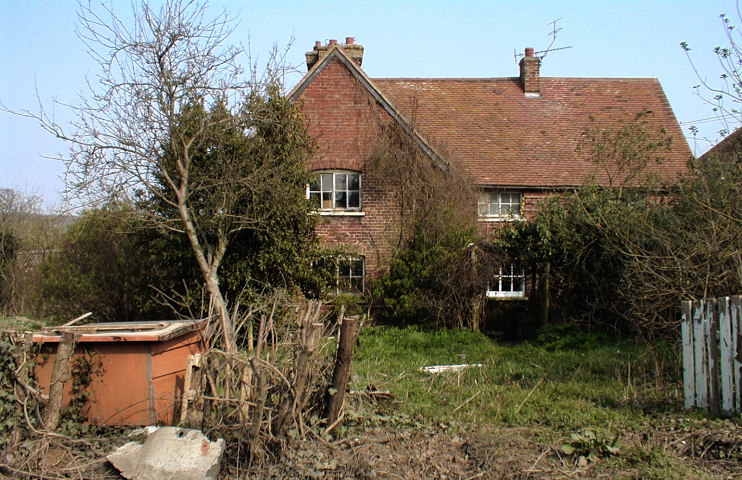 The origin of the Newyears Green name, which is also spelt as three separate words, is uncertain. It is either a corrup­tion of a landowner’s name or it may have been connected with annual festiv­i­ties held on Lady Day (25 March), which was reckoned as the beginning of the year in England from the Middle Ages until 1752.

Drawn in 1754, Rocque’s map of Middlesex shows a small group of dwellings here. The sharp bend in Newyears Green Lane marks the point where another road used to fork off to Ickenham but this was closed after the enclosure of the fields in 1813. The route is still a public bridleway (which looks very much like a road on Google’s satellite map, below).

Though much of the surrounding area consists of undu­lating farmland, Newyears Green Lane is besmirched by a rubbish dump and recycling centre, a scrap metal yard and the largest composting facility of its kind in Europe (extending above and below the ‘Newyears Green’ place name on the map below), where kitchen, garden and farm waste from all over London and beyond is converted into a variety of soil condi­tioners for agri­cul­tural and commer­cial uses. There’s also a 16-acre dogs’ rehoming centre on Harvil Road opposite the junction with Dews Lane, which leads to Hillingdon Outdoor Activ­i­ties Centre.

Managed by the London Wildlife Trust, Dews Farm Sandpits are situated on the west side of Harvil Road, just north of the junction with Newyears Green Lane. There is woodland and scrub around varied grassland rich in flowers and insects.

On higher ground to the south, Newyears Green Covert is believed to have been planted in the mid-19th century to meet a demand for hunting and shooting. The woodland canopy is dominated by pedun­cu­late oak, ash, hornbeam, English elm, black­thorn, hawthorn and hazel. The covert is desig­nated a Site of Impor­tance for Nature Conser­va­tion and has recently been extended with a young plan­ta­tion to the west.

Enabling works for the construc­tion of the HS2 rail link from London to Birm­ingham have resulted in the clearance of trees and other vege­ta­tion from Newyears Green Covert. A 2¼ mile viaduct will curve north-westwards from here, carrying the railway line over Newyears Green Bourne and the Colne Valley into Buck­ing­hamshire, as shown in the concept image above. However, assur­ances have been given that no damage will be done to the north­ern­most section of the covert, which is desig­nated as ancient woodland. The first HS2 services are expected to run on the line in 2026.