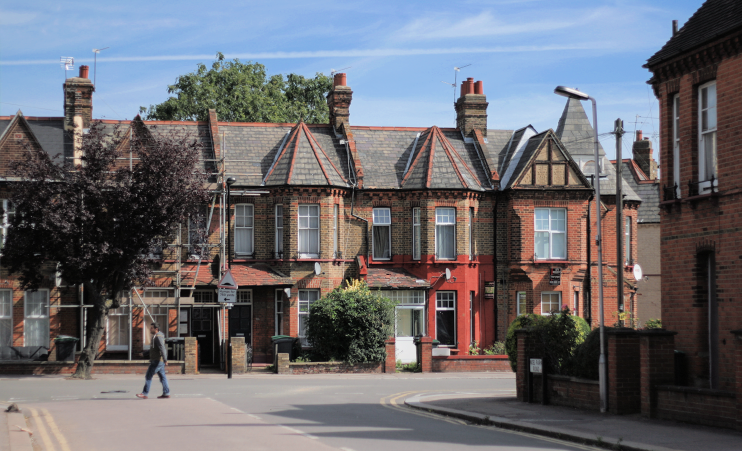 Noel Park was laid out by the Artizans’, Labourers’ and General Dwellings Company between 1883 and 1907. The estate was named after the company’s chairman, Ernest Noel MP.

This had been 100 acres of farmland belonging to Dovecote House (also known as Ducketts). The estate’s archi­tec­ture is distin­guished by the turret-like gables surmounting many corner houses and some of these seem to have been designed to resemble dovecotes in honour of the farm that they replaced.

The project took advantage of the opening of a station on the Palace Gates branch line in 1878, which provided a conve­nient route to the docks and factories of east London, with early workmen’s fares. Five types of houses were built, most of which were offered at rents of less than £25 a year.

The northern part of Noel Park was built first, followed later by the streets south of Gladstone Avenue, which is shown in the photo­graph above at its junction with Noel Park Road.

St Mark’s church and Noel Park board school opened in 1889, and the company demol­ished some mid-Victorian villas to build shops on Dovecote Avenue. (All that’s left of Dovecote Avenue now is a passageway from the High Road to Bury Road car park.)

Residents were enter­tained at the Empire Theatre from 1912 but no public houses were permitted on the estate.

A later phase of house­building filling the gap between Moselle Avenue and Lordship Lane was completed by 1927, by which time the network of tightly-packed terraces had over two thousand houses.

Noel Park & Wood Green station closed in 1963 and was demol­ished in the 1970s to make way for Wood Green shopping city (now The Mall), while the old goods yard became the site of the Sandlings housing development.

The former board school is now Noel Park primary, which was converted to academy status in 2012 in an attempt to address its low standards. Ofsted rated the school ‘good’ in 2014 and, following a short inspec­tion in March 2018, confirmed that it continues to be good.

Noel Park has a rela­tively high propor­tion of local authority housing and lower than average owner occu­pa­tion. At the 2011 census, a quarter of the residents of Noel Park ward were white British and the next largest ethnic minori­ties were of black Caribbean and black African origin or descent.

After the closure of the Empire Theatre in 1955, Associated Television used the building as a production studio for several years, and made the seminal hospital drama series Emergency Ward 10 there.