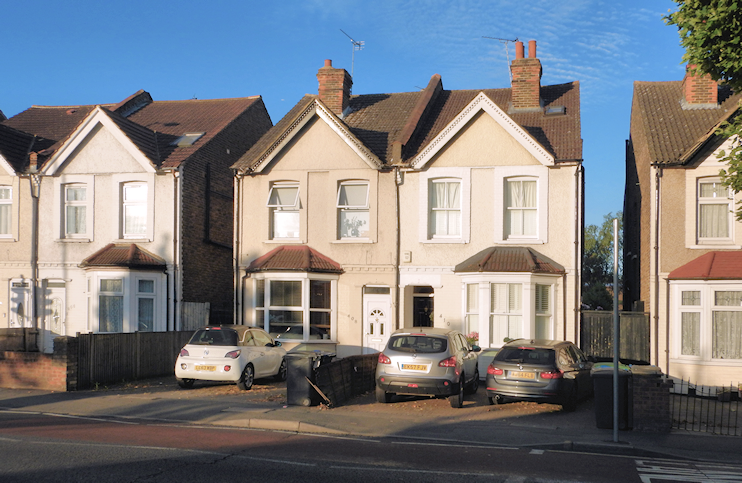 The 320-acre common was enclosed in 1808 and soon filled with farms, small­hold­ings – and William Smith’s nursery, which was highly regarded in the 1830s for its novel varieties of roses and rhodo­den­drons. Present-day Norbiton Common Road is located at the far north-west corner of what was the common, which stretched east-south-eastward beyond the track that was then called Trap’s Lane and is now New Malden High Street. The two main farms were Norbiton Common Farm in the west and Norbiton Park Farm (later called Wait­e­lands Farm for a while) in the east.

The London and Southampton Railway cut across the south-east corner of the common in 1838, when Kingston-​​on-​​Railway station opened – as the fore­runner of Surbiton station.

Norbiton Park Farm was the focus of a scandal in 1862. The Liberal MP William Roupell pleaded guilty at the Old Bailey to a charge of having forged docu­men­tary evidence of his ownership of the farm and was sentenced to penal servitude for life. Inci­den­tally, it’s an indi­ca­tion of the broad extent of Norbiton Common that Norbiton Park farmhouse was located on what is now Park Court, which is near the bottom right corner of the map below and very much part of present-day New Malden.

After the London and South Western Railway’s Kingston loop reached Norbiton in 1869 much of the agri­cul­tural land here was sold off for devel­op­ment. The first houses were built along Kingston Road (then called Cambridge Road here, as it still is further to the north-west), of which the two grandest were Cambridge Villa (later Lodge) and Norbiton Lodge. Cali­fornia Road, St John’s Road and Wellington Road (now Crescent) were among the earliest resi­den­tial sidestreets.

Around Kingston Road the original dwellings were mostly replaced with council houses after the Second World War, which are now in a variety of states – some cared for, some not.

The area bounded by Kingston Road, Dickerage Lane and the railway lines became a commer­cial and light indus­trial zone, which nowadays also has some retail super­stores. The flats of Crown House were built on the former site of Norbiton Lodge.

Three of the Mount school’s dilap­i­dated old buildings were demol­ished in 1993 and were replaced by the executive homes of Archdale Place. Following a decline in its repu­ta­tion, from which it has now almost fully recovered, the Mount school was renamed King’s Oak primary school in September 2010.

South of Kingston Road are the Kingsmeadow sports complex and the Search­light youth and community centre. Kingsmeadow is presently home to Kingstonian football club and AFC Wimbledon – the supporters’ rein­car­na­tion of Wimbledon FC, formed in 2002 after the original club moved to Milton Keynes. In June 2016 Kingsmeadow was sold to Chelsea football club for use by its youth and women’s teams, subject to the approval of AFC Wimble­don’s plan to move to a new stadium, to be built on the site of Wimbledon greyhound stadium. Kingstonian will then be paid “a substan­tial sum of money” to help them secure their future at another ground in or around Kingston.

* The picture of houses on Kingston Road on this page is adapted from an original photograph, copyright James Emmans, at Geograph Britain and Ireland, made available under the Attribution-ShareAlike 2.0 Generic Licence. Any subsequent reuse is freely permitted under the terms of that licence.