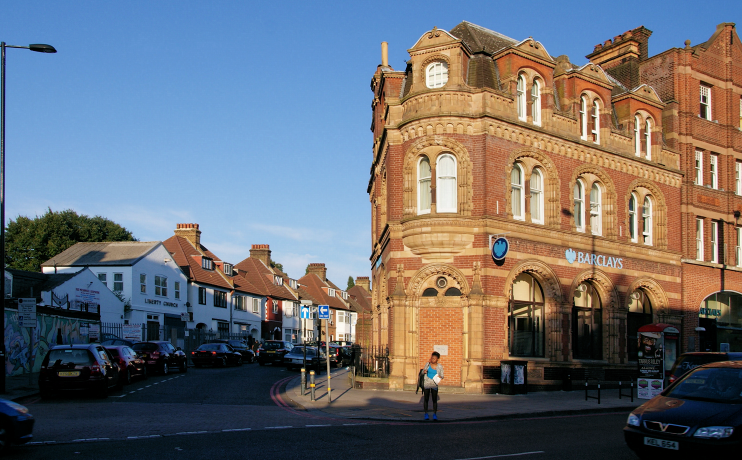 The existence of a manor house was first noted in 1229 and it was known by 1359 as Northbury, the ‘northern manor house’ of Croydon. The manor extended across the London road and included the common that was later called Thornton Heath. It was in the posses­sion of the Carews of Beddington for almost five centuries from 1385.

Norbury Hall was built in 1802 and is said to have been designed by John Nash, although there is little evidence to support this claim. Situated on the south side of Craignish Avenue, the stuccoed grey-brick mansion is now a resi­den­tial care home, with playing fields occupying part of its former grounds.

From 1868 horse races were held on land to the west of the London Road. Horses were brought here from Streatham Common station until a station was opened at Norbury in 1878 with long ramps leading down the embank­ment to the platforms. However, the increas­ingly unruly race meetings were halted soon afterwards.

The railway connec­tion failed to stimulate devel­op­ment and the open land attracted the attention of the London County Council in 1901. The LCC acquired 30 acres to the south-west of the station for one of its first of ‘out-county’ estates, built beyond what was then the London boundary. Norbury station was rebuilt to handle the increase in traffic and an electric tram service ran along London Road. A first phase of nearly 500 terraced ‘cottage homes’ was mostly complete by 1910, accom­pa­nied within two years by a handful of shops – but no pubs were permitted.

The manor house, which had become Norbury Farm, was demol­ished in 1914 and its site is marked by Manor Farm Road. After the First World War the LCC built a second phase of its cottage estate, influ­enced by the design of Hampstead Garden Suburb.

Croydon council added more municipal dwellings in the latter part of the 1920s and acquired the 18-hole North Surrey golf course in 1935, which it then laid out as Norbury Park.

The park is traversed by an open section of the Norbury Brook, which is called the River Graveney to the west of Hermitage Bridge, said to be named after one or more hermits who once lived nearby.

Since the Second World War the most visible change to Norbury’s built envi­ron­ment has been the construc­tion of office blocks on London Road, mostly in the early 1960s.

All the main ethnic minori­ties are well repre­sented in Norbury and almost three-quarters of homes are owner-occupied. According to a Guardian article in 2011, Norbury might not be the New Wimbledon but it could be the New Streatham – “if it’s lucky.”

Sherlock Holmes wanted Dr Watson to whisper ‘Norbury’ in his ear whenever he became over-confident, on account of his misinterpretation of the evidence in ‘The Adventure of the Yellow Face’.

The comedian Will Hay lived at 45 The Chase between 1927 and 1934. Hay was best known for playing a bombastic schoolmaster and appeared in 18 films during his Norbury residence. Comedian and actor Roy Hudd unveiled a blue plaque on Hay’s house in 2000.

Norbury was also the home of Derek Bentley, controversially hanged for his part in the killing of a Croydon policeman in 1952.