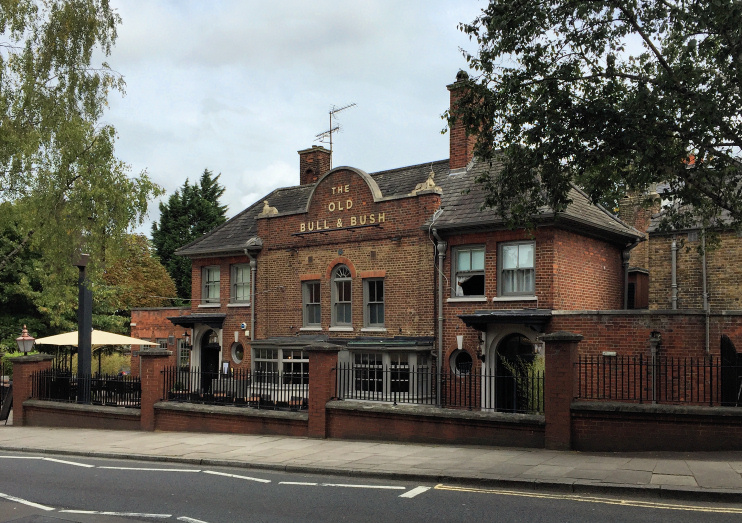 The Old Bull and Bush, a haunt of the artists Hogarth, Reynolds and Gains­bor­ough, is located at the northern end of North End Way. The pub is the subject of a famous music hall song:

There’s a little nook down near old Hampstead Town,
You know the place, it has one great renown.
Often with my sweet­heart on a bright summer’s day,
To the little pub there my footsteps will stray.
If she hesitates when she looks at the sign,
Promptly I whisper, ‘Now do not decline,
Come, come, come and make eyes at me
Down at the Old Bull and Bush.’

The early-17th-century (but much altered) Spaniards Inn was formerly a toll house and suppos­edly the residence of the Spanish ambas­sador to the Court of James I. Alter­na­tively, the name may simply derive from a former landlord, whose nation­ality proved more pronounce­able than his name. The tavern was once the occa­sional rendezvous of the gentry of the road.

Jack Straw’s Castle cele­brates the alleged hideout of Wat Tyler’s lieu­tenant, but the present building dates only from the 1960s. Formerly a pub, it has now been converted to flats. Karl Marx and Friedrich Engels frequented its prede­cessor, as did Charles Dickens, who drank almost everywhere.

North End was the home of William Pitt the Elder in 1766–67. Wylde’s Farm has played host to William Blake and the ubiq­ui­tous Dickens. Some of its lands were bought in 1905 to become the Heath Extension. From 1906 to 1940 the farmhouse belonged to Raymond Unwin, architect of Hampstead Garden Suburb. In 1912 the dancer Anna Pavlova bought Ivy House, and lived here until she died in 1931.

North End was to have had the deepest tube station in London – at the Bull and Bush – but residents’ objec­tions prevented it from ever opening. In the 1950s the partially built lower level was converted into an under­ground control centre for ‘flood­gates’ on the deep tubes around central London. In case these gates should ever need to be used in a war situation the control room is allegedly ‘blast-protected’ – even against sustained nuclear attack.

Recent years have seen a growing number of ‘futur­is­ti­cally’ styled prop­er­ties inserted into North End – to the distress of some residents who want to preserve its rural charm.

The artist John Linnell took his family to live at Collins’ Farm (originally Wylde’s Farm and now the Old Wyldes) in the 1820s to provide them with a refuge from the unhealthy air of London. His 1831 painting of the farm depicts a pastoral idyll reminiscent of a Constable landscape.

* The picture of the Old Bull and Bush at the top of this page is slightly modified from an original photograph, copyright Matt Brown, at Flickr, made available under the Attribution 2.0 Generic licence. Any subsequent reuse is freely permitted under the terms of that licence.