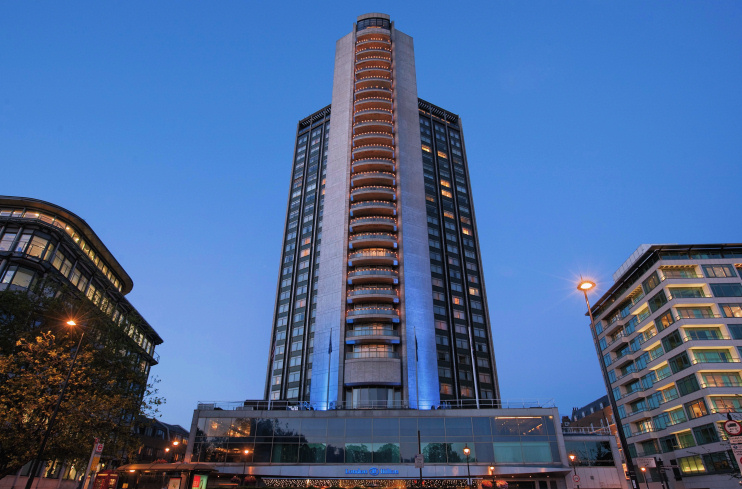 What is now Park Lane was a rough track called Tyburn Lane until the 18th century. As Mayfair grew, titled gentlemen erected mansions on the east side of the new road. Dorch­ester House was built in 1751 but did not gain that name until after its acqui­si­tion by Joseph Damer, who was made first Earl of Dorch­ester in 1792.

The Grosvenor family, later the dukes of West­min­ster, lived on Park Lane from 1806. From the 1820s the road was inten­sively built up with very fine houses. In 1869 Dorch­ester House was rebuilt for Robert Stayner Holford in the style of a Renais­sance palace. The German financier Alfred Beit commis­sioned Aldford House in 1897.

With such fine views across the park, even the high values of its 18th- and 19th-century mansions did not deter property spec­u­la­tors from rede­vel­oping the road between the wars, mostly with luxury hotels. When the art deco Park Lane Hotel (now the Sheraton Park Lane) opened in 1927 it was the first British hotel with a bathroom for every bedroom.

The Grosvenor House hotel opened in 1929 and in the same year Dorch­ester House was demol­ished. The floors and ceilings of the highly specified hotel that replaced Dorch­ester House were lined with compressed seaweed for improved soundproofing.

In 1962 part of Hyde Park was taken to allow Park Lane to be made into a dual carriageway and the road was diverted at the south end to enter Hyde Park Corner by the side of Apsley House. A cavernous under­ground car park was built beneath Hyde Park, with single-storey space for 1,100 cars and inno­v­a­tive automatic entry barriers.

Shown in the photo at the top of this article, the 28-storey Hilton became a new London landmark on its comple­tion in 1963. The Inn on the Park (now the Four Seasons) followed in 1970.

In addition to its hotels, Park Lane also has prestige offices and showrooms for exclusive car marques. Only near its northern end is there any semblance of conven­tional retailing at street level.

The National Trust was founded at a meeting in Grosvenor House in 1895.

* The picture of the London Hilton on Park Lane at the top of this page is modified from an original photograph taken in December 2011, copyright Sabrina756, at Wikimedia Commons, made available under the Attribution-Share Alike 3.0 Unported licence. Any subsequent reuse is freely permitted under the terms of that licence.