Chalk downland in north Kenley, and its neighbouring residential locality 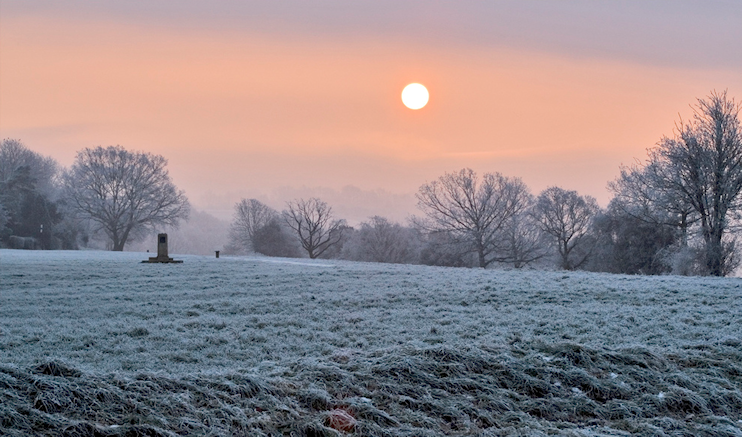 Part of Riddles­down is a scheduled ancient monument containing Neolithic remains. Saxon graves have been discov­ered on Riddles­down Road and their alignment suggests that the route was in use in the seventh century.

Riddles­down was first mentioned by name in 1277 and derives from Old English and Middle English words meaning ‘cleared woodland on a hill’. The woodland is believed to have consisted of beech trees, which flourish on chalky soil. A quarry that produced lime from the chalk deposits was in existence by the late 18th century.

The Corpo­ra­tion of London acquired the majority of Riddles­down in 1883, preserving it as open space. The acqui­si­tion resolved a dispute between the owner of nearby Little Roke House and the lord of the manor, who had been attempting to encroach on the common land.

The common’s Metro­pol­itan drinking fountain and cattle trough is visible in the middle distance in the photo­graph at the top.*

Riddles­down national school catered for children from Purley and Kenley in the years when the hamlets were first evolving into suburbs. Gardner’s pleasure resort was estab­lished in 1892 at the foot of Riddles­down, and for a while drew day-trippers in their thousands.

Riddles­down station opened in 1927 and a tunnel carries the railway line south­wards beneath the down. The neigh­bouring area soon filled with some pleasing houses and small parades of shops were built near the station, although only one was occupied ten years later. Devel­opers never­the­less persisted and built another parade in 1939, which proved equally difficult to let.

St Edmund’s church was built on Mitchley Avenue in 1955. It is a hall church, i.e one that is used as a community resource during the week – for activ­i­ties such as play­groups, badminton and Brownies – but converts into a church when services are to be held.

In 1962 Riddles­down Residents’ Asso­ci­a­tion success­fully defeated an attempt to build six three-storey blocks of flats near the station but the sites were even­tu­ally developed in the 1980s.

Located at the south-eastern end of the common, Riddles­down Quarry closed in the 1960s and is now of regional impor­tance for its geolog­ical interest. Access to the quarry is restricted (but not for goats, which roam freely here).

* The picture of Riddlesdown Common at sunrise in winter at the top of this page is reformatted from an original photograph, copyright Brett Oliver, at Geograph Britain and Ireland, made available under the Attribution-ShareAlike 2.0 Generic Licence. Any subsequent reuse is hereby freely permitted under the terms of that licence. Click here for a closer view of the Metropolitan Drinking Fountain and Cattle Trough.