Still a distinct locality in southern Harrow, though its identity was sapped by the naming of its station as South Harrow – but, happily, the council has revived the Roxeth ward name 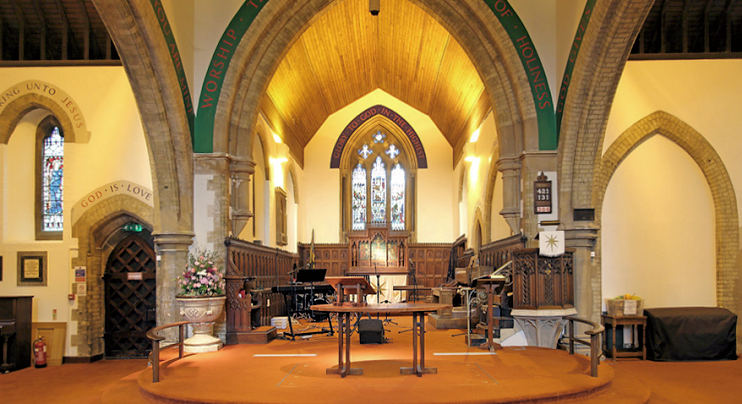 First recorded in ad845, the name may have meant ‘rooks’ place’ or may have been related to a resident called Hrōc.

This was common land until its enclosure in 1817, but it became one of the first parts of the borough to expe­ri­ence suburban devel­op­ment – in the 1840s. In the area formerly called Roxeth Marsh a gas works was built in 1855 – which pushed the area down­market for a while.

Christ Church Roxeth was conse­crated in 1862. The architect was Sir Gilbert Scott. Pevsner says, “The first new church in the old parish, and still very much a church for a country hamlet rather than a suburb. Prettily set into the slope of the hill away from the road, it is small and flint-faced, with a tiny bell-turret and plate tracery.” The church’s east end is shown in the photo above.*

The Harrow Cottage Hospital was founded a stone’s throw from the church in 1866. It had nine beds and occupied two leased cottages. The main hospital building opened in 1906. The architect was Arnold Mitchell, who was also respon­sible for St Margaret’s (1895), a grade II listed house on Mount Park Road.

When the District Railway station opened in 1903 it was with the convo­luted desig­na­tion, South Harrow for Roxeth and Northolt, and the railway crossed Roxeth Marsh on a viaduct. Most of the area was built up between the wars.

Harrow hospital closed in 1998 and Barratt Homes rede­vel­oped the site in 2006, converting the surviving hospital buildings into 21 luxury apart­ments. Town­houses and apartment blocks were also built on the site.

At the 2011 census, 23 per cent of Roxeth’s residents were white British, and the next largest minori­ties were of Indian and Sri Lankan birth or descent. Three-quarters of homes here are owner-occupied.

RM Ballantyne, the Scottish writer of children’s adventure books, lived for eight years in Mount Park Road until his death in 1894.

* The picture of Christ Church, Roxeth Hill, at the top of this page is adapted from an original photograph, copyright John Salmon, at Geograph Britain and Ireland, made available under the Attribution-ShareAlike 2.0 Generic Licence. Any subsequent reuse is freely permitted under the terms of that licence.