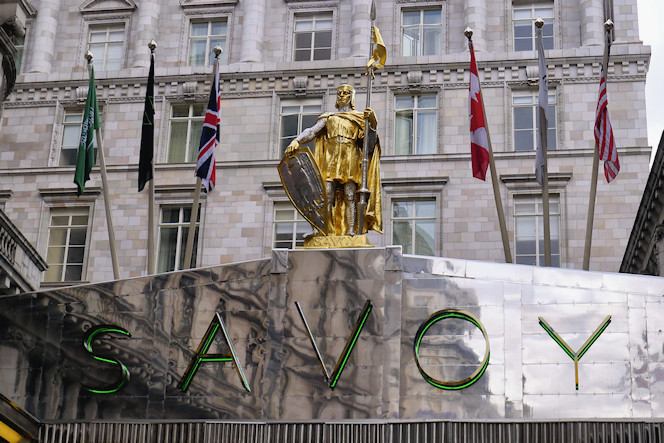 In 1245 Henry III granted this place to his wife’s uncle, Peter, Count of Savoy, who built himself a palace here. After the count left in 1263 the Savoy Palace became the residence of Eleanor of Castile, wife of Prince Edward – who became Edward I in 1272. The palace was later given to Queen Eleanor’s second son, Edmund of Lancaster. In the latter part of the 14th century it was the residence of John of Gaunt, who virtually ruled England from here for several years.

Most of the original buildings were destroyed by Wat Tyler’s followers during the Peasants’ Revolt in 1381, but Henry VII bequeathed funds for the recon­struc­tion of the palace as a home for the poor, which was named St John’s Hospital. It became a military hospital, then a barracks under Charles II.

A chapel was built within the Savoy precinct in 1505-12 and, after the destruc­tion of St Mary le Strand by Edward Seymour, it became known as St Mary le Savoy. The chapel remains an important part of the Savoy estate, the Duchy of Lancaster’s principal London land­holding. Members of the public are welcome to attend services in what is now the Queen’s Chapel of the Savoy.

In the late 17th century the Savoy precinct became a notorious place of sanctuary for desper­a­does and outlaws, who were nicknamed ‘Savoyards’ – a term orig­i­nally applied to natives of Savoy in France. (Later, the word was used for performers in, or devotees of, the Savoy operas – see below.)

Except for the chapel, the old Savoy buildings were demol­ished with the construc­tion of John Rennie’s Waterloo Bridge, which was completed in 1831.

In 1881 the impre­sario Richard D’Oyly Carte built the Savoy Theatre to stage his produc­tions of the Gilbert and Sullivan operettas. It opened with Patience, which trans­ferred from another theatre, and the first original produc­tion here was Iolanthe in 1882. The theatre is now part of the Ambas­sador group and presents modern, musical-based productions.

The success of the Savoy operas enabled D’Oyly Carte to commis­sion the construc­tion of the Savoy hotel, on the site of the former Savoy Palace. Its first manager was César Ritz (who went on to found the Ritz hotel) and its first chef was Auguste Escoffier, who created the Peach Melba here in honour of Dame Nellie Melba’s visit in 1892.

In 1898 the Savoy acquired Simpson’s‑in-the-Strand, which had evolved from a chess club and coffee house into London’s best-known restau­rant for tradi­tional British fare, espe­cially a roast beef dinner.

The restau­rant’s original buildings were demol­ished when the Strand was widened in 1903 and Simpson’s was rebuilt as part of the complex linked to the hotel.

In 1923 the BBC estab­lished its first studios in an office block on Savoy Hill. The building, which is now called Savoy Hill House, remained the BBC’s head­quar­ters until 1932.

A consor­tium headed by Prince Al-Waleed bin Talal bought the Savoy hotel in 2005 and awarded the manage­ment contract to Fairmont Hotels and Resorts. In December 2007 the hotel closed in order to undergo a lavish restora­tion that took almost three years to complete. Some of the Savoy’s historic memo­ra­bilia are now on display in a small museum space located left of the entrance to the American Bar.

Arnold Bennett’s Imperial Palace (1930), his last and longest novel, is set in the Savoy hotel.

The hotel features as the place of punishment of ‘Godolphin Horne’, the subject of one of Hilaire Belloc’s Cautionary Tales for Children (1907) and a well-born child who is beset by the sin of pride: “So now Godolphin is the Boy / Who blacks the Boots at the Savoy.”

* The picture of Savoy Court on this page is adapted from an original photograph, copyright David Hallam-Jones, at Geograph Britain and Ireland, made available under the Attribution-ShareAlike 2.0 Generic Licence. Any subsequent reuse is hereby freely permitted under the terms of that licence. The photo of the stainless steel sign over Savoy Court (at the top of the page, with the sculpture of Count Peter of Savoy) is courtesy of the conservators and restorers Hare & Humphreys.