The ancient woodland of Shooters Hill and its accompanying residential locality lie between Plumstead and Eltham, while the road of the same name was part of Watling Street, the Roman road to Dover 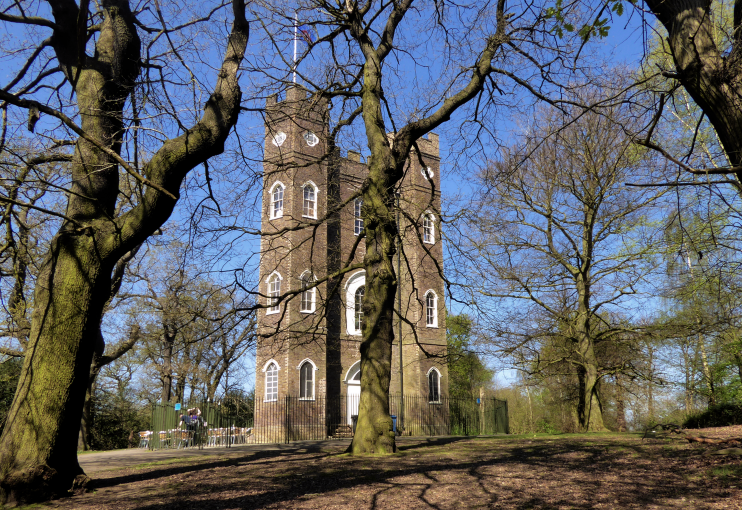 At 432 feet, the summit of Shooters Hill is one of the highest points in Greater London. Its name was first recorded in 1226 and probably derives from the use of the slopes for archery practice – but some histo­rians have suggested a link with high­waymen. Henry IV ordered the clearance of trees bordering the road in an unsuc­cessful bid to protect trav­ellers from ‘violent practices’.

In the 18th century several aris­to­crats and knights cleared parcels of woodland to erect grand houses with land­scaped gardens, now all lost. In what is now Castle Wood, Lady James commis­sioned the gothic folly Severn­droog Castle in 1784. Her late husband, Sir William James, had led a naval force that captured the fortress of Suvar­nadurg on India’s Malabar coast in 1755.

From the mid-19th century a village began to develop on the hillside, soon gaining a police station, church and school. Early 20th-century amenities included an ornate octagonal water tower, a fire station that has been converted into flats – one of which retains the firemen’s pole – and in 1927 the Memorial Hospital.

George Wimpey laid out the Shooters Hill estate in the 1930s but most of the higher parts of the hill were saved from further devel­op­ment by the London County Council, which made a series of acqui­si­tions between the wars to create a public open space that is now desig­nated a site of special scien­tific interest.

Oxleas Wood and Woodlands Farm were threat­ened by plans to construct a link road to a proposed east London river crossing but these were abandoned in 1993, following a long-running conser­va­tion battle that ended with victory in the European Court.

Following a campaign organised by the Severn­droog Castle Building Preser­va­tion Trust Severn­droog Castle was restored in 2013–14. Its location is marked with a big pink pin on the map below (or beyond the left edge if you’re viewing on a narrow screen).

The demo­graphic profile of Shooters Hill ward is closer to that of the country as a whole than the rest of the borough, except that its non-white minori­ties made up a third of the popu­la­tion at the last census, compared with 14 per cent for England and Wales in total.

Byron’s Don Juan (1823) includes these lines in the eleventh canto:

Don Juan had got out on Shooters’ Hill
Sunset the time, the place the same declivity
Which looks along that vale of good and ill
Where London streets ferment in full activity.

* The photo of Severndroog Castle on this page is modified from an original photograph, copyright Marathon, at Geograph Britain and Ireland, made available under the Attribution-ShareAlike 2.0 Generic Licence. Any subsequent reuse is hereby freely permitted under the terms of that licence.