The north-eastern part of suburban Bromley, spread around golf courses and a magnificent mansion 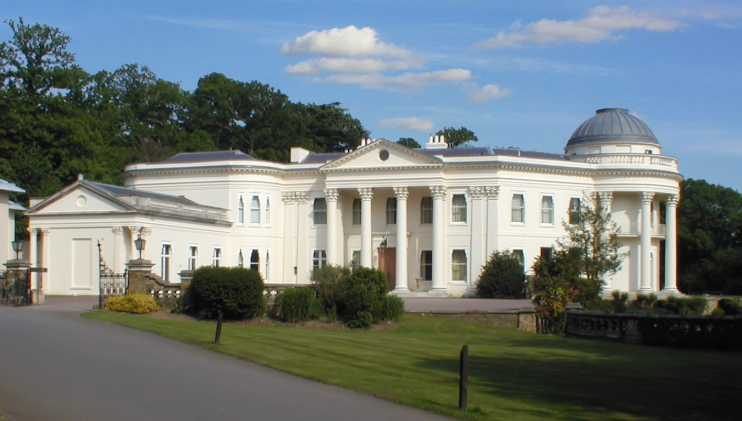 First mentioned in a charter dated 987, Sundridge (or Sundresse, as it was orig­i­nally known) was in the hands of the Le Blund family for several centuries from around 1220.

From the 17th century a succes­sion of wealthy Londoners lived here and a three-storey brick house was built on the southern slope of the Quaggy River valley early in the 18th century. Sir Claude Scott purchased that house in 1795 and demol­ished it on the advice of Humphry Repton, building the present mansion on the opposite slope and creating the park. The stuccoed stately home was designed by John Nash and the work was completed under the direction of Samuel Wyatt.

When the railway line to Bromley North opened in 1878 the Scott family had a station built for their private use. Sir Edward Scott won fame for breeding pheasants and his namesake the Prince of Wales (the future Edward VII) was equally well-known for his love of killing them. Under­stand­ably, the two men became friends and the prince often visited Sundridge Park for game-shooting weekends.

Near the end of the century Sir Edward began to sell off the estate and a rebuilt station opened to the public as Sundridge Park in 1896. The park became a golf course, with a new clubhouse opened by prime minister AJ Balfour in 1903. What began as a nine-hole course has since grown into a pair of what Nikolaus Pevsner calls “unusually umbra­geous” eighteen-hole courses.

To the south-east, on Sundridge Avenue, Robert Whyte junior built a grand house for his family in 1899. After his death, Whyte’s widow and daughters saw through his plan to create a music room capable of holding up to 80 guests. Family concerts featured perfor­mances by Sir Adrian Boult, Paul Tortelier and many others. In 1968 the house became an arts centre that now attracts around 20,000 people a year to its concerts, art exhi­bi­tions, inter­na­tional cinema screen­ings and classes and workshops of various kinds.

Several archi­tec­turally impres­sive houses from the mid-20th century are clustered east of Sundridge Park station, on Plaistow Lane, Edward Road and Lodge Road. Two of the most highly regarded are Godfrey Samuel’s By the Links (1935) and Ivor Berresford’s cedar-clad Brooklyn, which is shown in the photo on the right. Inspired by modernist trends in American archi­tec­ture, Berres­ford designed Brooklyn for himself and his new wife in 1958. He paid £800 for the quarter-​​acre plot and spent around £3,500 having the house built. Today, it could cost almost as much to rent the place for a month.

Sundridge Park mansion func­tioned as a luxury hotel until after the Second World War and became a manage­ment centre in 1956. A new block of resi­den­tial accom­mo­da­tion was completed in 1970. The mansion until recently hosted meetings, events, team building exercises and the like – but within the next few years it seems likely to be converted back to resi­den­tial use, accom­pa­nied by some luxury dwellings in the grounds.

The Russian anarchist Peter Kropotkin lived at 61 Crescent Road for almost half his adult life. David Bowie spent much of his childhood (from 1955 to 1965) living at 4 Plaistow Grove. Both addresses are located just to the south-west of Sundridge Park station.