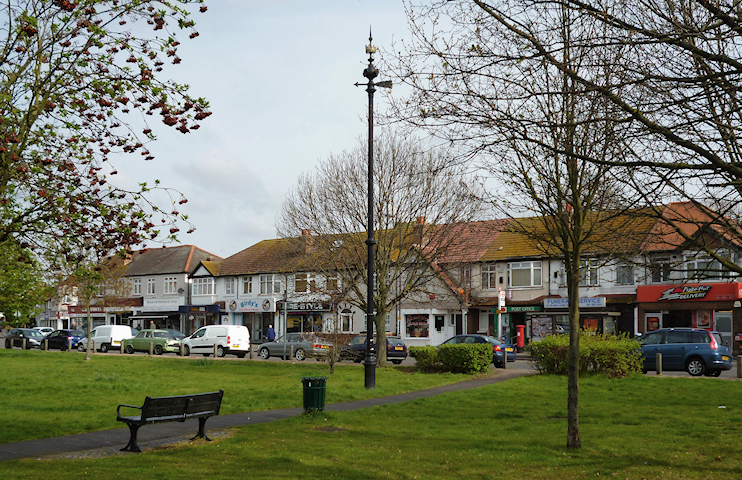 The name was first recorded as ‘Rithe’ in 1229, and later misspelt as ‘Rye’. It did not gain an initial ‘W’ until the 19th century. A rithe was a small stream, usually one occa­sioned by heavy rain.

Gravel was extracted here from late medieval times. The area was subject to frequent flooding from an over­flowing pond on the west side of Green Wrythe Lane and this may explain why there was so little habi­ta­tion here for so long.

A cottage appeared and disap­peared during the 17th century but the first enduring structure was a workhouse, built in 1792. Later named Leicester House, it went on to serve as a conva­les­cent asylum and then as a succes­sion of private schools. Beyond its grounds the Wrythe was common waste that stretched consid­er­ably further north than the green does today.

Improve­ments in drainage in the early 19th century brought the begin­nings of a hamlet at Wrythe Green, which had two dozen dwellings by around 1850. A handful of houses survive from this era and now form the nucleus of the Wrythe Green conser­va­tion area. The disused Rosehill toll-house was rebuilt here around 1866 and given an extra floor and distinc­tive herring­bone weath­er­boarding. It was renamed Bedford Cottage, later changed to Woodcote House.

A herb farm operated nearby until after the First World War. Leicester House was vacated in the 1930s and demol­ished after the Second World War owing to its neglected condition – but Woodcote House survived a similar threat and was restored.

The Durand Close council estate was popular with young families when it was built in the 1960s but suffered a decline and was after­wards the subject of a major regen­er­a­tion programme.

The Wrythe’s residents are rela­tively poor by the borough’s standards and 83 per cent are white, according to the 2011 census.

The Salvation Army’s Carshalton Corps has its church hall on Green Wrythe Lane. In the 1880s the corps held noisy open-air prayer and hymn meetings on Wrythe Green until locals bombarded members with soot, flour and abuse.

* The picture of Wrythe Green on this page is adapted from an original photograph, copyright Dr Neil Clifton, at Geograph Britain and Ireland, made available under the Attribution-ShareAlike 2.0 Generic Licence. Any subsequent reuse is freely permitted under the terms of that licence.
Dr Clifton draws the viewer’s attention to the ornamental sewer vent pipe in the centre of the top picture. ‘Yelfy’ discourses at length on the subject of Carshalton’s ‘stink pipes’ in a Faded London blog post.