The southern tip of St Helier, although its early developers marketed it as a north-western extension of Carshalton 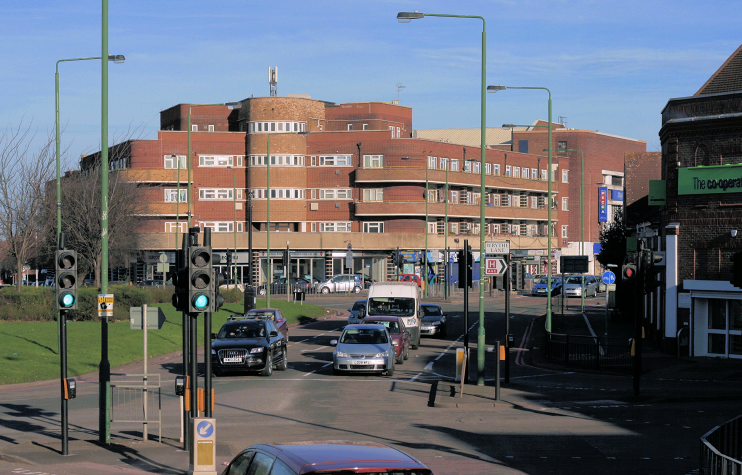 There is much confusion about whether to spell this place’s name as one or two words; Hidden London uses ‘Rosehill’ for the locality and ‘Rose Hill’ for the road that connects Rosehill with Angel Hill and Sutton High Street.

There is no docu­men­tary support for the assump­tion that this was a hill where wild roses grew; the locality simply takes its name from Rosehill Farm (later Rosehill House), which stood here from at least the mid-18th century. At that time the noto­ri­ously marshy road to London was improved with the intro­duc­tion of a turnpike – and a toll-house was built at Rosehill, which marked the boundary point between the baili­wicks of the Croydon and Reigate Turnpike Trust and the Surrey and Sussex Trust. Around 1866, after the abolition of the turnpike, the toll-house was taken down and moved to Wrythe Green, where it was rebuilt, enlarged and named Woodcote House.

Following the London County Council’s creation of the St Helier estate and the opening of the station at Sutton Common in 1930, devel­opers turned their attention here, building suburban semi-detached houses and the impres­sive apartment block and shops of Rosehill Court (shown in the photo­graph above), with an adjoining Gaumont cinema that provided the main leisure amenity for St Helier.

A hundred acres of former farmland became Rosehill Park, which is split into west and east parts by Rose Hill. The Gaumont became a Mecca bingo hall in 1961 and was grade II listed in 2000. The Rose public house has been replaced by a supermarket.

In the early years of the 21st century Bellway Homes added an apartment complex at Rosehill Triangle (where Rose Hill and Reigate Avenue converge), with some retail units and afford­able housing. Rosehill Park’s sporting facil­i­ties have been much enhanced, and rebranded The Sports Village, which has a special emphasis on tennis.

In 2015 the borough’s need for an addi­tional secondary school prompted consid­er­a­tion of Rosehill Park West as a potential site. However, the council subse­quently decided against building on the parkland here – which is desig­nated ‘metro­pol­itan open land’ – and in favour of a brown­field site in Belmont.

The comedy scriptwriter Ray Galton was living in Rosehill when he and Alan Simpson came up with East Cheam (specifically 23 Railway Cuttings) as Tony Hancock’s address in the classic radio – and later television – series, Hancock’s Half Hour.