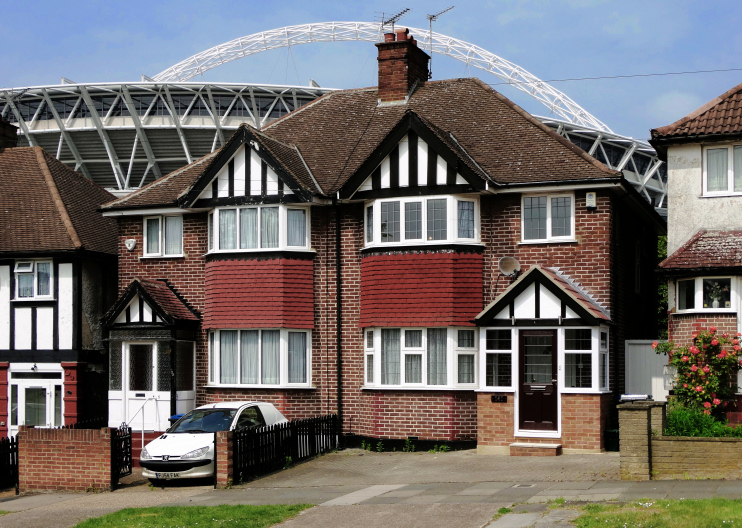 Although it was sometimes called Oakington, this place’s name does not derive from some historic tree (unlike, for example, Noak Hill or Little Roke) but from ‘the farm of the sons of Toca’ and was first mentioned in 1171. The manor rivalled Wembley for economic signif­i­cance in the Middle Ages and had a chapel that survived into the 18th century. After a brief spell as Oakington Park in the mid-19th century, the last decades of the manor’s rural existence were as Sherrin’s Farm.

The Great Central Railway line ran across the north of the farm in 1906 and the lord of Tokyngton manor, Sir Audley Neeld, entered into an agreement with Wembley council to develop a ‘garden city’ estate of semi-detached houses in 1913. Work began the following year, paused during the First World War and resumed after­wards. The estate was the borough’s first exercise in town planning and is now a conser­va­tion area.

Neeld extended the estate in 1932 and later conveyed 21 acres, together with the dilap­i­dated Tokyngton manor house, to the council for use as open space. A proposal to convert the manor house into a library was rejected and in 1939 it was blown up in an exercise designed to test the readiness of air raid precautions.

After the Second World War the council built low-rise blocks of flats, partly in place of bomb-damaged houses. The construc­tion of the Bakerloo Line depot at Stone­bridge Park in the far south of the locality proved an unpopular devel­op­ment in the 1970s.

Most homes in Tokyngton are owner-​​oc­cu­pied and Chris­tianity, Hinduism and Islam are the main religions.

According to the 2011 census, the ward of Tokyngton has an extra­or­di­narily diverse ethnic mix, even by the standards of Brent, which is a very multi­cul­tural borough. Most parts of London tend to be dominated by a small number of ethnic groups to the exclusion of certain others, but this is not the case in Tokyngton, as the table below shows.

The picture of Oakington Manor Drive on this page is adapted from an original photograph, copyright Neil Theasby, at Geograph Britain and Ireland, made available under the Attribution-ShareAlike 2.0 Generic Licence. Any subsequent reuse is hereby freely permitted under the terms of that licence.