A lovely (but inevitably pricey) ribbon village strung along the road from Whetstone to Highwood Hill and set amidst farmland, parks and golf courses 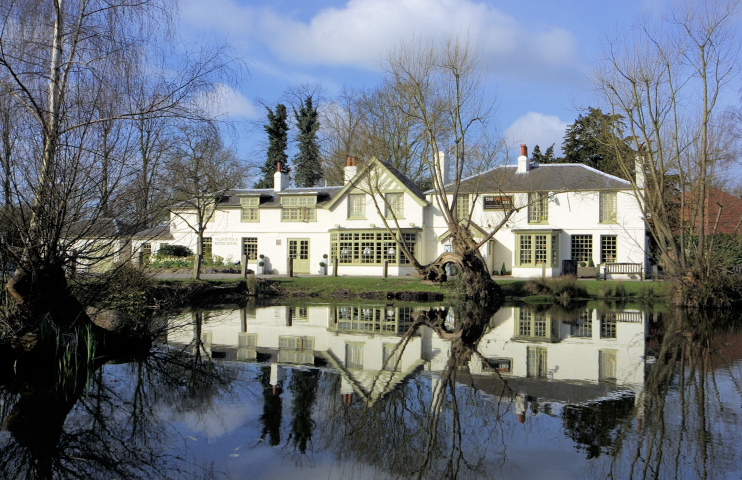 This place was first recorded as Taderege in the 12th century. Opinions differ on the deriva­tion of the first part of the name: most experts now propose an asso­ci­a­tion with a man called Tōta, but others have suggested that ‘tot’ meant either a height or a place of worship. The ‘ridge’ part is undis­puted: Totteridge sits on a crest that rises well above 400 feet.

The land here was part of the Bishop of Ely’s medieval estate at Hatfield in Hert­ford­shire. The church of St Ethel­dreda was mentioned in a document of 1250. It is said that the Edward I visited in 1305 and the bishop had a house and chapel here by 1357, on the site of the present Totteridge Park. The church was rebuilt in 1790, by which time it had become St Andrew’s, and its church­yard has a yew tree that may be more than thousand years old.

Several struc­tures survive from the late 17th and early 18th centuries, mostly farm outbuild­ings. The oldest mansion is Totteridge Park, built in 1750 but remod­elled in the early 20th century. The renowned architect R Norman Shaw was respon­sible for Ellern Mede in 1877. Shaw’s plans for the house’s interior are now with the Royal Academy.

Totteridge’s other mansions are mostly recent creations, as the village has become a haven for business and media moguls who wish to retreat behind high walls and security gates. Since the early 1990s more than a dozen seven-figure prop­er­ties have been built, and there would have been more had it not been for green-belt restrictions.

Totteridge Village has all the rural essen­tials: shops, primary school, cricket club, village hall and the Orange Tree public house, shown in the photo­graph above.

North of the village, the Raven­scroft secondary school opened in 1954, having evolved out of what is now Foulds school in Barnet. It became the Totteridge Academy in 2011 and its pupils come from a broad catchment area.

To the west, Totteridge Fields are ancient hay meadows managed by the London Wildlife Trust.

The Totteridge ward has a large Jewish community, and residents tend to be married, middle-aged home­owners, often with dependent children.