A tube station and locality at the southern tip of Wood Green, taking its identity from the road that runs west towards Hornsey 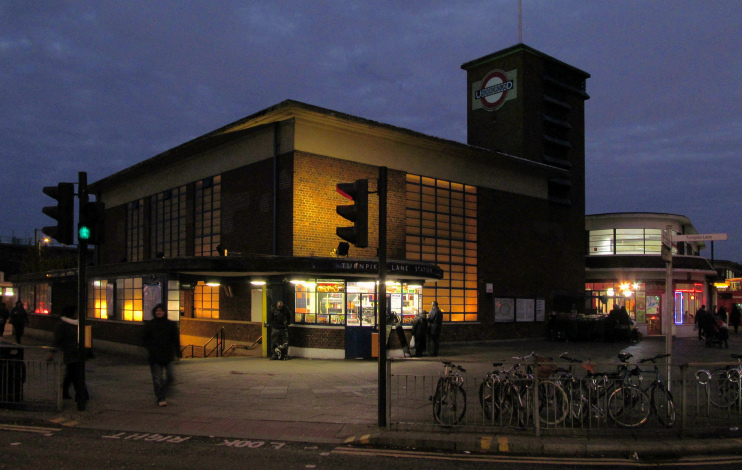 Turnpike Lane branches westward from the point where Wood Green High Road meets Harringay’s* Green Lanes. It was formerly called Tottenham Lane, as it still is further to the south-west.

In the early 18th century the road through Wood Green became increas­ingly busy as trav­ellers sought a route that avoided the Whetstone turnpike on the Great North Road. An act of 1710 autho­rised the intro­duc­tion of a turnpike at Hornsey although tolls were not levied until 1739. The Stamford Hill and Green Lanes Turnpike Trust finally erected a gate here in 1765. For the next 27 years this was the only tollgate on Green Lanes, which at that time extended much farther north.

The turnpike system was abolished in 1872 and the gate was disman­tled. By this time, the Wellington public house was standing at the corner of Turnpike Lane and the High Road, now the site of a Costa coffee shop.

Turnpike Lane station opened in 1932 on the newly extended section of the Piccadilly line from Finsbury Park to Arnos Grove.

The art deco Turnpike Parade was built beside the station entrance, with a cinema that survived until the enlarge­ment of the neigh­bouring bus station in 1999. The bus station was renovated and upgraded in 2014.

Together with Westbury Avenue, which runs north-east towards Tottenham, Turnpike Lane has become a low-rent overspill from the retail agglom­er­a­tion of Wood Green. Much of the lane is now lined with shops, takeaways and hair­dressers serving the diverse local community, which includes increas­ingly well estab­lished residents from the eastern Mediter­ranean, the Caribbean and the South Asian sub-continent – espe­cially Bangladesh.

Riding Black Bess, the highwayman Dick Turpin allegedly leapt the spike-topped gate at Turnpike Lane, when pursued by a posse led by the chief constable of Westminster.

* Note that the borough is spelt ‘Haringey’ while ‘Harringay’ is one of its constituent parts. Unsurprisingly, both derive from the same old place name – but, less obviously, so too does does ‘Hornsey’.

* The picture of Turnpike Lane station at the top of this page is adapted from an original photograph formerly posted at Flickr, copyright David Holt, made available under the Attribution 2.0 Generic licence. Any subsequent reuse is hereby freely permitted under the terms of that licence.