A pretty and prosperous rural hamlet that evolved into a built-up corner of West Ham, situated just south of (and nowadays often considered part of) Forest Gate 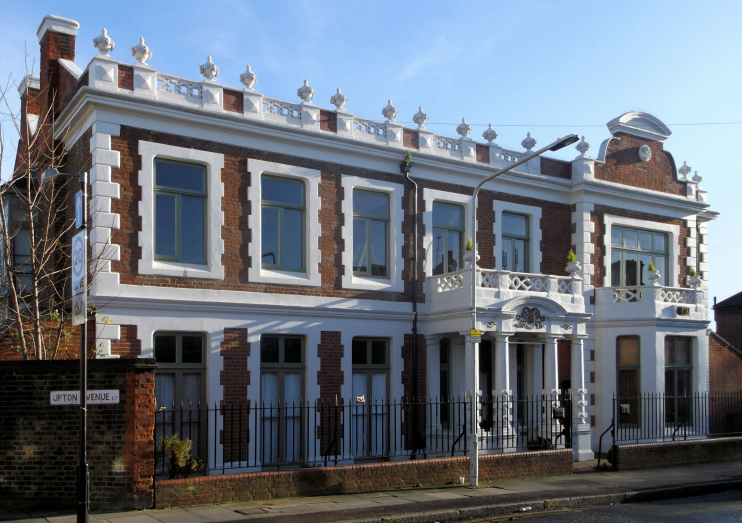 Upton was first recorded in 1203 as Hupinton, then in 1290 as Hopton and 1485 as Upton. The name derives from the Old English words upp and tūn, meaning ‘higher farmstead’. There is a slight rise here in an otherwise low-lying area of what was once marshy terrain.

By the 17th century Upton had become a pros­perous hamlet. The ward of Upton (which didn’t last long before it was absorbed within Church Street) contained 25 dwellings in 1670. Ten of these homes had at least five hearths (generally consid­ered the minimum necessary for genteel existence) – a very high proportion.

One of the houses in existence at that time was an already ancient timber-framed structure said to have begun life as Henry VIII’s Forest Gate hunting lodge and/or dog kennels, though there’s not much evidence for this. The house was later extended and converted into an inn called the Spotted Dog.

Wonder­fully, ‘the Dog’ has survived to the present day as the oldest non-eccle­si­as­tical building in the London Borough of Newham. Woefully, it has been abandoned for more than a decade, boarded up and left to rot – as shown in the photo below. It is on Historic England’s Heritage at Risk register – but planning permis­sion and listed building consent have been secured for the repair and re-use of the building as pub, restau­rant and hotel. 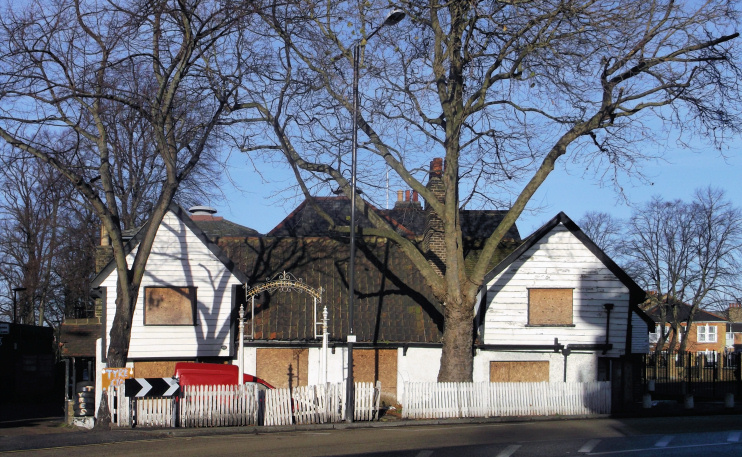 Another dwelling assessed for hearth tax in 1670 was Rooke (or Rookes) Hall, which dated from the mid-16th century and was later renamed Upton House. In 1762 Admiral John Elliot sold Upton House to Dr John Fothergill, who enlarged the grounds and filled them (and several glasshouses) with rare and exotic botanical species. Dr Fothergill was one of a number of Quakers to settle in Upton around this time. The closely-knit community was linked by marriage with the Pelly family, West Ham’s principal landowners.

Upton House was renamed Ham House in the late 1780s, which helped avoid potential confusion with a different Upton House that by then stood on Upton Lane at what is now the corner of Lancaster Road. Joseph Lister, who pioneered anti­septic surgery, was born at this Upton House, which is shown in the water­colour below.

The Quaker banker and phil­an­thropist Samuel Gurney bought Ham House in 1812. He stayed there for the rest of his life – and members of his family stayed there for the rest of the build­ing’s life. Samuel Gurney’s elder sister, the prison reformer Elizabeth Fry, lived in a house on the edge of the estate from 1829 to 1844. In 1842 she enter­tained Frederick William IV of Prussia there.

Ham House was demol­ished in 1872 and two years later its grounds were opened to the public as West Ham Park. Since its inception the 77-acre park has been owned and managed by the City of London Corpo­ra­tion. The site of Ham House is marked by a cairn of stones in the park – and by a big pink pin on the map below.

“The pretty rural hamlet of Upton is a little more than a mile north-east of West Ham church,” wrote James Thorne in his Handbook to the Environs of London, published in 1876. No sooner had Thorne’s words appeared than the pretty hamlet began to disappear beneath gridded streets of terraced housing, built for the factory workers of West Ham. When the house­builders turned their atten­tions to the fields south-east of Upton in the mid-1880s, they called their new estate Upton Park (which will be the subject of a separate article on Hidden London soon-ish).

Having once been a country haven for Quakers, urbanised Upton gained favour with east London’s Irish Catholic community. The local­i­ty’s surviving Roman Catholic insti­tu­tions include the church of St Antony of Padua and St Antony’s, St Bonaventure’s and St Angela’s schools.

Shown in the photo at the top of this article,* the Red House began life in the 18th century as the home of a Dutch merchant and was exten­sively remod­elled in the 1880s. It was later the home of a manu­fac­turer of early trade union banners, after which it served as a Catholic club until its recent conver­sion back to resi­den­tial use. The Red House stands at the corner of Upton Lane and Upton Avenue. It should not be confused with the other Red House in the other Upton.

The Anglican church of St Peter’s was erected in Upton House’s garden in 1893 and the church gained its own parish a year later. Upton House became the vicarage and parish rooms. A little to the south, Meggs’ almshouses were also built in 1893. They now provide sheltered accom­mo­da­tion for elderly people.

Upton Lane board school opened in 1894 at the corner of Doris Road. It was destroyed by bombing during the Second World War and in 1959 the site was used for the new Stratford grammar school, which has since become the Upton Lane campus of Stratford School Academy.

In 1962 St Peter’s parish was united with Emmanuel, Forest Gate, and the church was after­wards demol­ished. Its vicarage (Upton House) was pulled down in 1967–8 and replaced by the unpre­pos­sessing flats of Joseph Lister Court. A few other old houses were demol­ished in the post-war era, along with some bomb-damaged premises, and replaced by council flats. Since then, Upton’s built envi­ron­ment has changed very little, except for moderni­sa­tion of the schools and the construc­tion of a scattered handful of low-rise apartment blocks.

Demo­graph­i­cally, the locality has evolved in similar ways to the wider area in recent decades. In partic­ular, Upton’s ethnic profile resembles Forest Gate’s, with around half of residents declaring Asian/Asian British ethnicity at the 2011 census. Residents of Indian and Bangladeshi heritage are espe­cially numerous here.

As for whether Upton should be consid­ered part of West Ham or Forest Gate, there’s no doubt that its histor­ical connec­tions are primarily with West Ham. But Upton’s inclusion within the E7 postal district and the proximity of Romford Road permit Forest Gate a strong claim to be its adoptive parent, espe­cially given the demo­graphic rela­tion­ship between the two. South of Plashet Road, Upton Park is of course a different matter.

Clapton football club moved to the Old Spotted Dog Ground in 1888. The Tons’ politically active fans have attracted some media attention in recent years, with the Mirror asking, “is Clapton FC the most left-wing football club in Britain?”

Postal district: E7 (but most of West Ham Park is in E15)

* The pictures of Red House and the Spotted Dog on this page are both adapted from original photographs copyright David Anstiss, at Geograph Britain and Ireland, made available under the Attribution-ShareAlike 2.0 Generic licence. The watercolour of Upton House is slightly modified from a copyrighted image at Wellcome Images, made available under the Creative Commons Attribution 4.0 International licence. Any subsequent reuse of these images is freely permitted under the terms of those licences.