A public park and the name used by estate agents for the neighbouring residential locality, situated to the south-east of Wanstead tube station 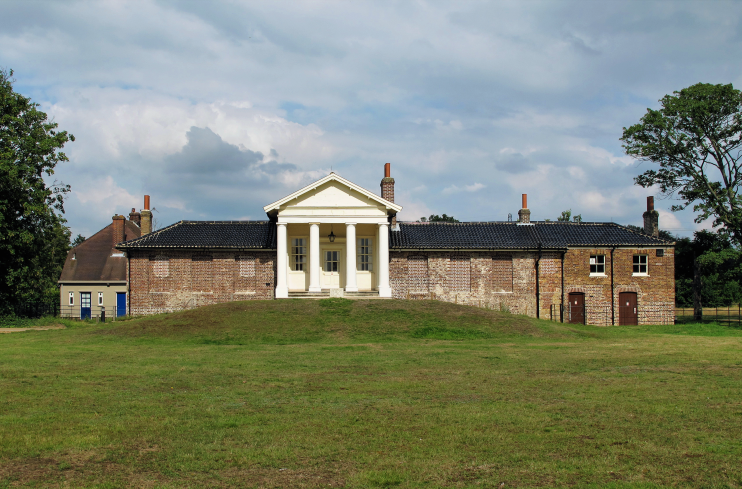 Wanstead Park was the site of a Roman villa and Wanstead manor house later stood on the north side of what is now the golf course, near the parish church. The house was orig­i­nally a small building called Wanstead Hall but was enlarged in 1499 so that it could serve as a royal hunting lodge.

The park was formed by enclosing part of Epping Forest in the mid-16th century. Sir Richard Child, later Viscount Castle­maine and Earl Tylney, inherited Wanstead House (as it became known) in 1715 and rebuilt it in 1722 on a magnif­i­cent scale.

In the 1760s the grounds of the house were adorned with an elaborate grotto and a Tuscan feature orig­i­nally called the Pheasant House and later known as the Temple, which was incon­gru­ously extended to provide living accom­mo­da­tion for the estate’s groundskeepers.

St Mary’s church was rebuilt in 1787 at the expense of Sir James Tilney. The medieval church­yard was recon­fig­ured at the same time and has since been extended twice. A small shelter was built in the church­yard to mark the grave of the sculptor Joseph Wilton and it served as a sentry box for a guard employed to keep watch for body-snatchers.

Wanstead House was demol­ished in 1834 after its contents had been sold to pay off the debts of the spend­thrift William Pole-Wellesley, nephew of the Duke of Wellington. Two gateposts bearing the monogram of Sir Richard Child survive at the junction of Overton Drive and Blake Hall Road, orig­i­nally the end of the drive leading to the house.

The Corpo­ra­tion of London acquired the grounds in 1880 and opened them to the public two years later. Most of the grotto was destroyed by a fire in 1884.

Wanstead golf course was laid out on and around the site of the mansion in 1893.

The park’s land­scaped grounds were allowed to grow wild but some more formal elements have recently been rein­tro­duced. The many ponds and islands, fed by the River Roding, are a haven for birds. Shown in the photo­graph* at the top of the page, the Temple has an exhi­bi­tion devoted to Wanstead Park’s history that is open at weekends and on bank holidays.

Wanstead Park and a select few houses on its doorstep are desig­nated a conser­va­tion area.

In 1717 James Bradley and his uncle James Pound set up one of the world’s largest telescopes in Wanstead Park. Pound and Bradley were respectively rector and curate of St Mary’s church and the latter subsequently became the third Astronomer Royal. The telescope was presented to them by Isaac Newton and mounted on a maypole brought from the Strand.

* The picture of The Temple at the top of this page is adapted from an original photograph, copyright Roger Jones, and the picture of St Mary, Overton Drive, is adapted from an original photograph, copyright John Salmon, both at Geograph Britain and Ireland, made available under the Attribution-ShareAlike 2.0 Generic Licence. Any subsequent reuse of either image is hereby freely permitted under the terms of that licence.