Thomas Clark opened a draper’s shop on Wigmore Street in 1778 and William Debenham became a partner in the business in 1813. William’s grandson Ernest played a major role in the company’s expansion – mainly through a series of shrewd takeovers and mergers.

In 1905 Ernest Debenham commis­sioned the architect and designer Halsey Ricardo to erect and decorate a fabulous mansion at 8 Addison Road, Holland Park.

Debenham House is Ital­ianate on the outside, Arts and Crafts on the inside – and richly coloured everywhere.

The main elements of the exterior are clad in varie­gated Doulton Carrara ware (a creamy terra­cotta that was mostly used for flower vases) with inset panels faced with green and blue Burmantofts bricks. Halsey Ricardo was an advocate of ‘struc­tural poly­chromy’ in archi­tec­ture, which basically meant incor­po­rating some strong colours to bring surfaces to life, rather than relying primarily on the interplay of light and shadow. Unim­pressed, Jonathan Meades has described the house as “struc­turally stodgy – an alderman dressed as a hippy.” But the glazed materials also had a practical purpose: they were intended to shrug off the polluted London air, in which conven­tional facades quickly got grimy and needed regular deep-cleaning to maintain their original appearance.

The central interior feature is a domed hall with a first-floor gallery connecting the upstairs rooms. Throughout the house the deco­ra­tion is extra­or­di­narily lavish, with William De Morgan tiling, mosaics depicting members of the Debenham family and subjects from classical mythology (and appro­pri­ately vain peacocks), sumptuous marble and tile fire­places, stained glass designed by ES Prior and mahogany bookcases with Art Nouveau inlays in wood and mother-of-pearl. Even the light switches were specially designed and made by the Birm­ingham Guild of Hand­i­craft.

The Debenham family moved out in the 1940s and the house served as offices for the Richmond Fellow­ship for much of the remainder of the century. It has since reverted to domestic use and (as far as Hidden London can determine) is presently part of a corporate invest­ment portfolio. Debenham House has been grade I listed since 1969 – which may have knocked a few million off its market value because no radical modi­fi­ca­tions have been or will be allowed, though permis­sion to install a lift and air condi­tioning was granted in 2012.

Not only has Debenham House featured in several films and TV shows (including an episode of Spooks), it is actually said to have been the inspi­ra­tion for Joseph Losey’s psycho­log­ical thriller Secret Ceremony (1968), which starred Elizabeth Taylor, Mia Farrow and Robert Mitchum. 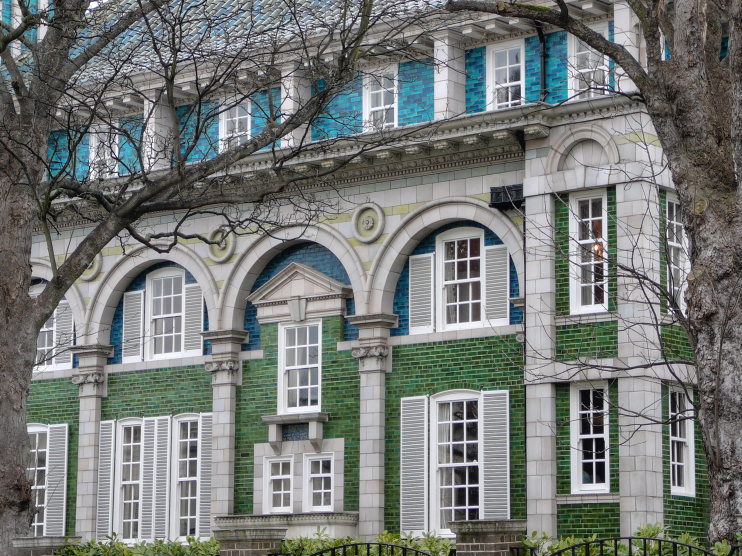