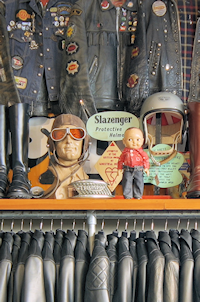 The business might have taken a more conven­tional sartorial direction if Mr Isaacs had chosen some other thor­ough­fare but Great Portland Street was soon to become Showroom Central for the nascent autocar industry. Benz Motors opened premises here in 1908 and within five years another 21 motor manu­fac­turers were displaying their vehicles along the length of the street. In those days almost all cars were open-topped – and motorists needed protec­tion from the elements. D Lewis accord­ingly began to specialise in coats, gloves, goggles and headgear for drivers.

By the 1930s the company was making leather­wear for motorists, motor­cy­clists and aviators at a factory in Lancashire and had trade­marked the brand name ‘Aviakit’ for its range of flying suits and accessories.

When private aviators were grounded during the Second World War and petrol rationing restricted private motoring, D Lewis survived by making clothing for the RAF.

From the mid-1950s D Lewis rode the wave of the new motor­cycle culture. British teenagers aspired to the American ‘outlaw biker’ look and company launched a series of short-bodied leather jackets – of which the Bronx has proved the most enduring style.

Punk fashion brought Lewis Leathers to the attention of a new gener­a­tion in the late 1970s, when Sid Vicious, Joe Strummer, Chrissie Hynde, Iggy Pop and Joey Ramone were among the lumi­naries photographed sporting the company’s leather jackets.

“His clothes hang from mismatch iron coat hooks screwed at precise intervals along the wall. The girl wears his jacket. Lewis Leathers. Great Portland Street. She asks where that is. Jacket older than she is.”

The Isaacs family continued to run the business until 1980, since when it has changed hands three times. The Great Portland Street store closed in 1993, after which Lewis Leathers sold its clothes, boots and acces­sories via mail order and through a handful of appointed stockists in the UK, the USA and Japan.

Present propri­etor Derek Harris bought the business in 2003 and restored the busi­ness’s retail presence – initially in Paddington, then relo­cating to Whitfield Street, a few blocks east of Great Portland Street. Harris isn’t a front-man for some anonymous invest­ment house but a true enthu­siast who’s been a Lewis customer for most of his adult life. He worked with then-owner Richard Lyon on rein­tro­ducing classic styles in the 1990s – primarily at that time for the Japanese market. 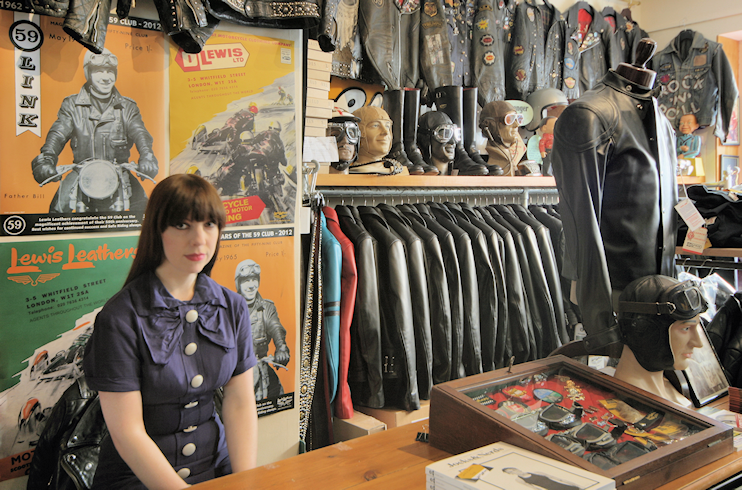