According to Thomas Tickell’s poetic fairy tale Kens­ington Garden (1722), the snowdrop first grew in Kens­ington, where it was created from the lifeless body of Princess Kenna’s lover Albion.

Dr E Cobham Brewer summarised Tickell’s narrative in the first edition of his Dictio­nary of Phrase and Fable (1870):

“Oberon, king of the fairies, held his royal seat in these gardens, which were fenced round with spells ‘inter­dicted to human touch;’ but not unfre­quently his thievish elves would rob the human mother of her babe, and leave in its stead a sickly changeling of the elfin race. Once on a time it so fell out that one of the infants fostered in these gardens was Albion, the son of ‘Albion’s royal blood;’ it was stolen by a fairy named Milkah. When the boy was nineteen, he fell in love with Kenna, daughter of King Oberon, and Kenna vowed that none but Albion should ever be her chosen husband. Oberon heard her when she made this vow, and instantly drove the prince out of the garden, and married the fairy maid to Azuriel, a fairy of great beauty and large posses­sions, to whom Holland Park belonged. In the meantime, Albion prayed to Neptune for revenge, and the sea-god commanded the fairy Oriel, whose dominion lay along the banks of the Thames, to espouse the cause of his lineal offspring. Albion was slain in the battle by Azuriel, and Neptune in revenge crushed the whole empire of Oberon. Being immortal, the fairies could not be destroyed, but they fled from the angry sea-god, some to the hills and some to the dales, some to the caves and others to river­banks. Kenna alone remained, and tried to revive her lover by means of the herb moly. No sooner did the juice of this wondrous herb touch the body than it turned into a snowdrop.”

When lo! the little shape by magic power
Grew less and less, contracted to a flower;
A flower, that first in this sweet garden smil’d,
To virgins sacred, and the Snowdrop styl’d.
The new-born plant with sweet regret she view’d,
Warm’d with her sighs, and with her tears bedew’d,
Its ripen’d seeds from bank to bank convey’d,
And with her lover whiten’d half the shade.

“When Henry Wise laid out the grounds for the Prince of Orange, Kenna planned it ‘in a morning dream,’ and gave her name to the town and garden.” 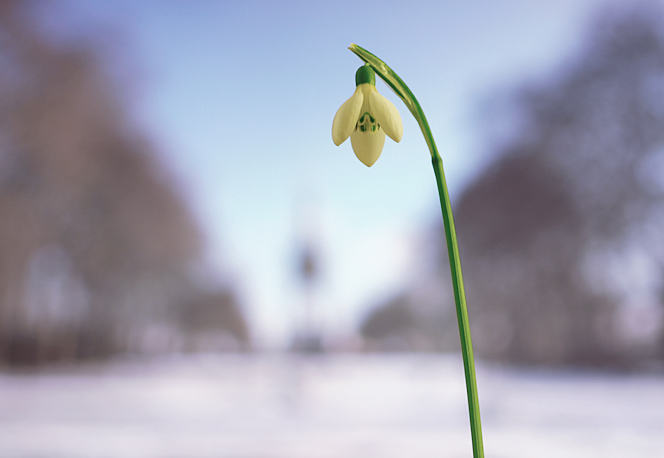