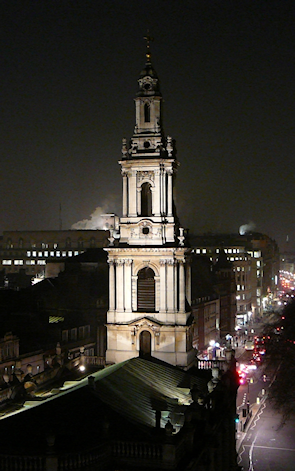 St Clement Danes is the central church of the Royal Air Force, situated on an island site in the Strand, just east of the Aldwych.

According to tradition, the first church of St Clement’s was built by Danes expelled from the City of London by King Alfred in the 9th century. It is said to be the burial place of the half-Danish Harold I (Harefoot), who ruled England from 1035 to 1040, first as regent for his half-brother and then as king.

The church escaped damage in the Great Fire of London but was rebuilt in 1681 by Christo­pher Wren and a steeple was added to the tower by James Gibbs in 1719.

The eccentric and wealthy William Pennington-Bickford, who was rector here from 1910 to 1941, intro­duced an annual Oranges and Lemons service and had St Clement Danes’ bell peal altered to include the tune of the famous nursery rhyme – despite the fact that St Clement Eastcheap has a stronger claim to be the church to which the rhyme refers. (Bickford also bought the ‘Roman’ bath around the corner but nothing ever came of his extrav­a­gant plans for its restoration.)

Incen­diary bombs gutted St Clement Danes in May 1941 and it was rebuilt in the mid-1950s. The church was re-conse­crated in 1958 as a shrine of remem­brance to those killed on active service and those of the Allied Air Forces who gave their lives during the Second World War.