The old cold bath that’s not that old

Victorian Londoners were a gullible lot, though they thought them­selves highly sophis­ti­cated. When the owner of a little-known plunge pool suddenly began to promote it as dating from the first century ad, almost everyone was taken in.

Respected writers soon attested that it was “without doubt a veritable Roman structure,” with walls “formed of layers of brick, of that peculiar flat and neat-looking aspect which certainly seem to imply the impress of Roman hands.” And in 1878 Walter Thornbury wrote floridly of the bath as “one of the oldest struc­tures in London, one of its few real and genuine remains which date from the era of the Roman occu­pa­tion of England, and possibly even as far back as the reigns of Titus or Vespasian, if not of Julius Cæsar himself.”

To be fair, the brickwork does bear a Roman resem­blance – and there was little evidence to contra­dict the story of its ancient origin – but histo­rians are now sure that the bath dates from the early 17th century.

Some have suggested that it was constructed as a spring water reservoir for Arundel House, the home of Thomas Howard, 2nd Earl of Arundel. Or perhaps it was created as an orna­mental accom­pa­ni­ment to the ‘Arundel marbles’ – the hundreds of Roman statues, busts, sarcophagi, altars and fragments with which the extrav­a­gant earl adorned the extensive grounds of his mansion. Thus, right from the start, it could have been intended to look like a Roman bath – so maybe those gullible Victo­rians could be excused.

However, Professor Michael Trapp and Dr Kevin Hayward of King’s College have recently rejected the connec­tion with Arundel House. Instead they propose that the bath was orig­i­nally the feeder cistern for a grotto-fountain built in the gardens of the old Somerset House for James I’s queen, Anne of Denmark, in 1612.

Whatever purpose it first served, the ‘old water-house’ had been converted into a bathing facility by 1776. Soon after this an ancillary bath was added, which was subse­quently claimed to have been “built by the Earl of Essex, in the reign of Queen Elizabeth, 1588.”

“I went yesterday afternoon to visit a Roman Bath, built by the Romans, over a spring, when they occupied London, of bricks and cement, precisely such as are now seen in all Ancient Roman ruins … It is used now as it has been for centuries, for bathing, and, though situated in Strand Lane, not six rods from the Strand, I do not believe its existence is known to one thousand of the three millions of people who inhabit London.”

Thurlow Weed, Letters from Europe and the West Indies, 1843–52

Charles Dickens is said to have frequented the Roman bath and he made David Copper­field endure “many a cold plunge” in it too. But in Dickens’s time it was the newer pool that was used for bathing while the ‘Roman’ bath served as a showpiece only. The ‘Essex’ bath was covered over in 1893, during the enlarge­ment of the Norfolk Hotel, now King’s College’s Norfolk Building. After its closure, some of the ‘Essex’ bath’s periph­eral deco­ra­tions were moved to the older bath-house – which is why you can see delftware tiling in the entrance hall today.

The wealthy rector of St Clement Danes purchased the bath in 1922 and hatched a madcap plan to restore it to what he imagined was its Roman glory. The idea never got off the ground and in 1947 the property was donated to the National Trust. The London County Council agreed to look after it and it’s been the City of Westminster’s respon­si­bility since the abolition of the LCC’s successor, the Greater London Council. Now it seems that the bath is destined to remain a quaint relic of the Stuart period – forever preserved but locked away, almost forgotten and only visible through a basement window unless you’ve made an appoint­ment for someone to come along and admit you.

The ‘Roman’ bath is excep­tion­ally hard to find. Strand Lane was once a little thor­ough­fare but it has led nowhere since King’s College blocked it off. To reach the bath you need to go halfway along Surrey Street (the bath is round the back of number 33), keeping your eyes peeled for an old National Trust sign above a gated archway. This leads into a narrow alley called Surrey Steps, from which you emerge into Strand Lane. Turn right and then look to your right for number 5. 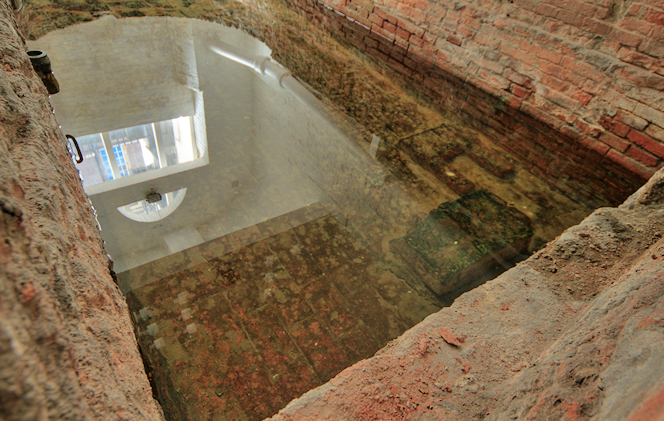 ‘Roman’ Bath, 5 Strand Lane, London WC2R 2NA
Admission by appointment only with Westminster council. Call 020 7641 5264 during office hours or email dcreese@westminster.gov.uk, giving a week’s notice. Visits are arranged for early afternoon on weekdays.
The premises are open to the public on the Saturday of London Open House weekend.
The bath is visible through a window from the pathway all year round, from 9am to dusk (the gate to the alley is locked outside these times). You can turn on the inside light using an external switch.
Nearest station: Temple (Circle and District lines)
NearbyTwinings Tea Shop And Museum