‘The most civilised way to spend an hour in north London’

Elihu Estorick was born in Brooklyn in 1913 to Jewish parents who had exiled them­selves from anti-semitic Russia. His father made a small fortune from inventing a machine that printed perfect colour samples. As a young man, Elihu switched to calling himself Eric, became a soci­ol­o­gist and political scientist and wrote several books, including two biogra­phies of the British politi­cian Stafford Cripps and a privately printed history of Marks & Spencer. He visited London often and made the city his permanent home shortly after the Second World War.

Eric and Salome Estorick (née Dessau) started collecting art on their honeymoon in 1948. In that time of austerity they bought hundreds of paintings and drawings at knock-down prices from all over Europe, espe­cially avant-garde and exper­i­men­talist work from Italy and from the USSR and other Iron Curtain countries. Eric also signed an agreement with the Soviet govern­ment to act as an official export agent for modern Russian artworks.

Within a few years the Estoricks had put together an outstanding collec­tion that was exhibited first at regional British galleries, then in 1956 at the Tate, and which after­wards toured Europe and the United States.

Eric Estorick (shown left in a painting by Arbit Blatas) was very much a dealer as well as a collector, selling some of the art he’d acquired and also buying at auctions on behalf of Hollywood clients who included Lauren Bacall, Burt Lancaster and Billy Wilder.

He profited hand­somely from acting as exclusive world agent for the illus­trator and fashion designer Erté, whom he met in Paris in 1967. Their part­ner­ship thrived for 20 years.

Six months before his death on Christmas Day 1993 he estab­lished the Estorick Foun­da­tion, to which he donated all his Italian works of art. The foun­da­tion purchased Northampton Lodge, a three-storey detached property in Canonbury built c.1820. The house was refur­bished and adapted to serve as a gallery with a substan­tial grant from the Heritage Lottery Fund.

The collec­tion is almost entirely devoted to Italian art from the first half of the 20th century, mostly from the Futurist school – a primarily Italian movement inspired by speed, tech­nology and modernity. The paintings and drawings are displayed in six rooms, one or two of which are often given over to a temporary show, such as the photo­graphic exhi­bi­tion shown in the image below.

The Estorick Collec­tion’s library has a signif­i­cant and growing collec­tion of books, peri­od­i­cals and cata­logues relating to 20th-century Italian art and is open to members of the public by appoint­ment. There’s also a gallery shop and a licensed Italian café with outdoor seating in the back garden. Rooms are also available to hire if you’re looking to lay on a classy function. 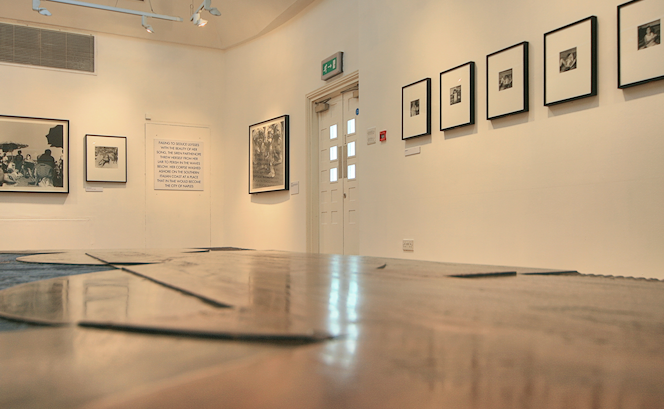