During Victoria’s long reign, living standards increased across the whole popu­la­tion and several talented entre­pre­neurs made fortunes mass-marketing processed foods that had previ­ously been afford­able only to a select few. Some of these successful busi­nessmen were phil­an­throp­i­cally inclined and disbursed their largesse in the London area, notably the sugar magnate Henry Tate and the tea trader Frederick John Horniman, who in the 1870s assumed control of the business his father had founded.

Like the phar­ma­ceu­tical entre­pre­neur Henry Wellcome, Horniman took a partic­ular interest in anthro­pology and travelled the world amassing ‘natural, indus­trial and artistic spoils’. He filled his large house with his collec­tion and, when his wife could stand the clutter no longer, the family moved out and their former home became a museum. The 16 acres of adjoining gardens were opened to the public not long after­wards. Horniman demol­ished his old house in 1898 and replaced it with the present purpose-built museum.

Frederick Horniman died in 1906 and his son Emslie continued to expand the museum’s collec­tion and its buildings. On his death in 1932, Emslie Horniman bequeathed the museum to the London County Council. Nowadays it’s run as a char­i­table trust, primarily funded by the Depart­ment for Culture, Media and Sport.

In one way, the Horniman Museum shouldn’t qualify for Hidden London’s Guide – because it’s actually one of the capital’s most visited attrac­tions. However, there’s a partic­ular reason for the high atten­dance figures: the museum is the desti­na­tion for a huge number of school outings. For most adults, the Horniman remains a lesser-known destination.

Despite its child-friend­li­ness, this is not a dumbed-down museum. The exhibits are well chosen, taste­fully displayed and accom­pa­nied by a lot of infor­ma­tive text, which – although written in plain English – isn’t infan­tilised. (Roll over the image below to get an idea of just how plentiful the text is.)

The Centenary Gallery is home to the anthro­po­log­ical collec­tion; African Worlds is the first permanent exhi­bi­tion in Britain dedicated to African art and culture; there’s a natural history gallery and an inter­na­tion­ally renowned collec­tion of musical instru­ments. Slightly incon­gru­ously, there’s also an aquarium, which seems to have been installed purely on the grounds that children like aquaria. Hands-on features have been added throughout the museum in recent years and you can download activity packs from the Horniman website to use during your visit.

Outside the front of the museum there’s a totem pole, carved in 1985 by Nathan Jackson, a Tingit Indian from Alaska. (There’s a picture of it on the ‘About’ page of this website). The Victorian conser­va­tory at the rear orig­i­nally graced the Horniman family home in Croydon. It was restored and recon­structed here in 1988, and is available for hire. 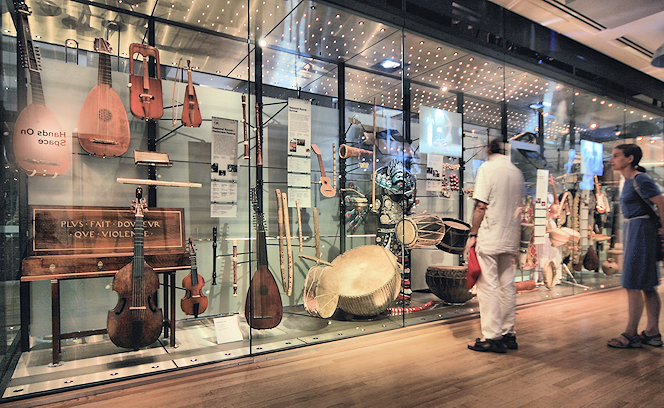