What it means to be human

This is one of London’s most impres­sive inde­pen­dent museums and the wealth of the char­i­table foun­da­tion behind it is every­where evident: in the quality of the permanent and temporary exhi­bi­tions, in the stylish surround­ings and in the free admission.

Henry Solomon Wellcome was born in a Wisconsin log cabin in 1853, subse­quently trekking with his family to Garden City, Minnesota. While working in his uncle’s drugstore at the age of sixteen, Henry launched his first product, an invisible ink (actually lemon juice) that he marketed under the ques­tion­able brand name ‘Ku Klux’.

The young entre­pre­neur moved to England in 1880 and, with fellow American Silas Burroughs, built one of the most successful phar­ma­ceu­tical companies of the age, primarily by cornering the European market for ‘compressed medicine tablets’ and promoting the products with cutting-edge sales and marketing techniques.

Henry Wellcome spent much of his fortune amassing a vast collec­tion of anthro­po­log­ical relics and artefacts and in 1911 he opened a ‘histor­ical medical museum’ next door to his company’s showroom in Wigmore Street.

The museum moved to its present site on Euston Road in 1932 but it was not until the building was radically revamped in 2007 that the collec­tion finally gained a worthy home. Even now, only a tiny fraction of Well­come’s treasure trove can be displayed; by the time of his death in 1936 he had acquired about 1½ million objects. His will provided for the creation of the Wellcome Trust, which funds scien­tific research and lobbies on health policy issues inter­na­tion­ally, as well as supporting the museum. The trust’s invest­ment portfolio is presently valued at around £18 billion.

The Wellcome Collection’s permanent exhi­bi­tion is Medicine Man, a cross-section of remark­able objects from the philanthropist’s stockpile, ranging from diag­nostic dolls to Napoleon’s tooth­brush. Many of the walls are crammed with works of art.

There are frequent and free guided tours and widely varied special exhi­bi­tions. See the What’s On section of the Wellcome website for details. This is one of the few London museums to offer late night opening (on Thursdays). There’s also a well-stocked bookshop (a branch of Black­well’s) and a classy café that’s enjoyed by in-the-know office workers as well as visitors to the collec­tion. The Wellcome Collection’s popu­larity has recently prompted the curators to add more space and facilities. 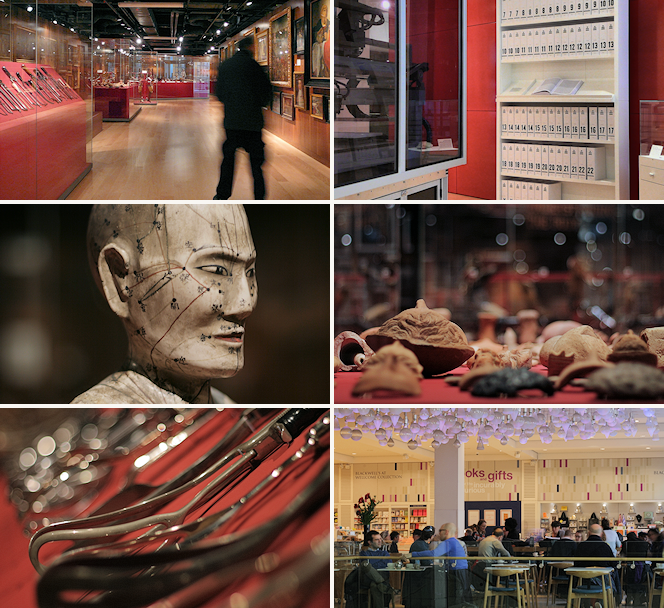