In 1676 Robert Davis, a hatter from Bish­ops­gate, leased five houses on the west side of St James’s Street and set up shop in one of them, drawing eminent customers from the newly fash­ion­able coffee shops nearby and from the Court of St James’s. James Lock entered into an appren­tice­ship at the hatters in 1747 and subse­quently married into the Davis family. He inherited the business in 1759 and six years later acquired new premises across the road at 6 St James’s Street, where the firm remains today and in which indirect descen­dants of Robert Davis and James Lock are still partners.

Not only do Lock and Co. sell a lot of tweed caps and bowler hats, they actually orig­i­nated them, one way or another. The woollen cloth used for the caps was orig­i­nally called ‘tweel’, the Scots form of ’twill’, but when the manu­fac­turer sent a consign­ment to Lock’s, in 1826, the name was badly written and misread, and as the cloth was made on the banks of the River Tweed, ‘tweed’ was accord­ingly adopted.

The bowler hat was created by Lock & Co. in response to a request from a Norfolk-based customer, William Coke, whose tall riding hat was too frequently swept off by over­hanging branches. There’s disagree­ment about the origin of the word ‘bowler’: some author­i­ties give the credit to the hat’s designer, suppos­edly one John Bowler, others to the suppliers of the felt, said to have been Thomas and William Bowler. Lock’s prefer to call the bowler hat a ‘Coke’.

Like nearby Fox’s (as it’s now called), Lock’s were one of Winston Churchill’s favourite suppliers, and they made his distinc­tive ‘chimney-pot’ hats to his own specification.

In Churchill’s day the company was famously conser­v­a­tive in all its ways of doing business, keeping longhand ledgers and appar­ently being ‘discreetly offended’ if a customer offered to pay in cash. Lock’s operate in a more 21st-century way now (even main­taining a Facebook page) but they still sell all the tradi­tional styles of hat – for both men and women – plus some couture millinery and a range of hipper headgear called the Lock & Roll collec­tion. A small section at the rear of the store is named the Country Room, because its stock consists almost entirely of flat, tweed caps.

Sadly, the shop doesn’t have the space to display much in the way of memo­ra­bilia; there’s just a single shelf of vintage hats, caps and helmets – mostly military – above the sales counter, out of reach and without any kind of descrip­tive labelling. 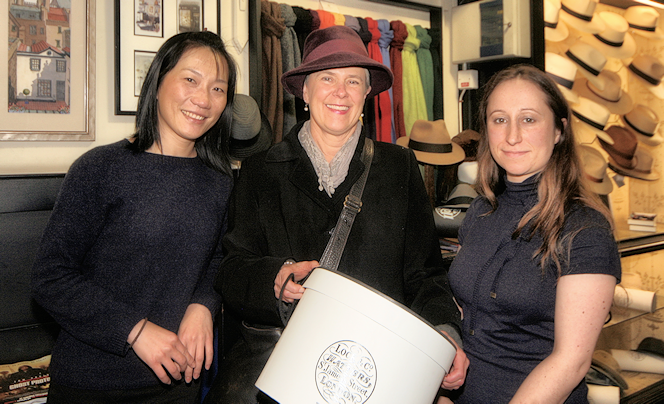 A Welsh Baronet and MP entered the shop of Lock & Lincoln, in St James’s Street, to purchase a hat. The foreman could not find one sufficiently large for the Baronet’s head, and stated that he only knew one person whose head was so large.

“Who is that person?” asked the indignant Welshman.

The foreman replied, “It is no other than the great minister, Sir Robert Peel.”

“Oh! oh!” exclaimed Taffy, “You make hats for that Radical, do you? Well, then, it shall never be said that you have sold me a hat. I have a horror of such men as your great ministers.” And the baronet left the shop in dudgeon, much to the wonder and astonishment of the hatter.